It’s a pleasure to welcome you all to my stop on the blog tour for Mavis and Dot by Angela Petch. My thanks to Rachel at Rachel’s Random Resources for the invitation to join. Author Angela Petch joins me on the blog today to talk about what prompted her to write this novella.

A warm slice of life, funny, feel-good, yet poignant. Introducing two eccentric ladies who form an unlikely friendship.Meet Mavis and Dot – two colourful, retired ladies who live in Worthington-on-Sea, where there are charity shops galore. Apart from bargain hunting, they manage to tangle themselves in escapades involving illegal immigrants, night clubs, nude modelling, errant toupees and more. And then there’s Mal, the lovable dog who nobody else wants. A gently humorous, often side-splitting, heart-warming snapshot of two memorable characters with past secrets and passions. Escape for a couple of hours into this snapshot of a faded, British seaside town. You’ll laugh and cry but probably laugh more.”This book is quirky and individual, and has great pathos…[it] will resonate with a lot of readers.” Gill Kaye – Editor of Ingenu(e). Written with a light touch in memory of a dear friend who passed away from ovarian cancer, Angela Petch’s seaside tale is a departure from her successful Tuscan novels.

All profits from the sale of the books will go towards research into the cure for cancer.

Mavis and Dot is a departure from my usual historical novels and I’m apprehensive about how it will be received. But, it’s a novella I have wanted to write since losing my best friend to ovarian cancer twelve years ago.

Olga and I met at the school gates. Our daughters remain best friends – my Emily was bridesmaid last year to her Beth. A candle for Olga was lit and I am sure she was there… When she was alive we often went on “jaunts”, as we called them, hunting in charity shops for bargains. Sometimes we found monstrosities too and we basically had a good laugh. We called each other Mavis and Dot. When her diagnosis was terminal, I wrote her a silly story about us – but it wasn’t really about us. It was about the caricatures we’d invented for ourselves. She enjoyed it and drew a picture which I have framed on my loo door.

It’s taken me a long time to turn into something longer than one story and I hope it will entertain and raise some pennies and pounds for research into cancer. Because she and loads of other sufferers should still be here today.

There are ridiculous moments in Mavis and Dot, but there are poignant episodes too. Both ladies had difficult pasts. Recently retired to the seaside, they are lonely and, although very different, form a friendship; a kind of prop. Then, Mavis meets Lance, a singer in a night club who likes to wear frocks and in Chapter 22, he drags them out one autumn afternoon.

“Two days later, Lance came to the door. ‘Right, ladies, I’ve come to whisk you both away for the afternoon.’

He stepped into the hall and Mal growled, the fur on his back rising, ‘It’s all right, mate, don’t you remember me?’ Lance said, bending to the dog who backed away, tail between his legs.

‘You have to admit,’ said Dot, ‘you do look rather different from the other day.’

‘Takes one dotty person to recognise another, eh?’ Lance giggled,

‘Yes, well…’ Dot said. ‘Anyway, Mal probably can’t recognise your scent today because of whatever you’ve drenched yourself in.’ She pinched her nose between finger and thumb. ‘What on earth is it?’

‘I stopped in Beale’s on the way to the bus and tried loads of perfume testers,’ Lance said, holding out his wrist to Dot, who wrinkled her nose. ‘I’m not sure I can come with you today,’ she said. ‘What if hospital lets baby Dorothea out early? I should be here for them.’

‘I’m taking no excuses, Dot. It will do you good to get out of the house,’ Lance said. ‘Mave, do you have a belt I could borrow? To nip this in at the waist?’ He pulled at the loose material of his dress.”

I’ll admit Mavis and Dot are caricatures – exaggerations or oversimplifications. But we all have our little ways, we are all products of our past and we are all individuals. One of my editors was annoyed by my ladies “of a certain age”. “I was a young woman in the 60s,” she said, “and I would never have behaved like Mavis.” We are all different, is my counter-argument.

A prize-winning author, Angela Petch lives half the year in West Sussex and the summer months in a remote valley in the Tuscan Apennines. She recently signed a two-book deal with Bookouture for her Tuscan novels and “Mavis and Dot” is a temporary departure from her usual genre. She has travelled all her life: born in Germany, she spent six years as a child living in Rome, worked in Amsterdam after finishing her degree in Italian, moved to Italy for her job, then to Tanzania for three years. Her head is full of stories and she always carries a pen and note-book to capture more ideas.

In May 2017, Angela Petch won PRIMA’S monthly short story competition and recently had a dozen stories published by The People’s Friend magazine.

“Mavis and Dot” was written in memory of a dear friend who lost her battle with ovarian cancer. All profits from sales of the book will go towards research into a cure for cancer. 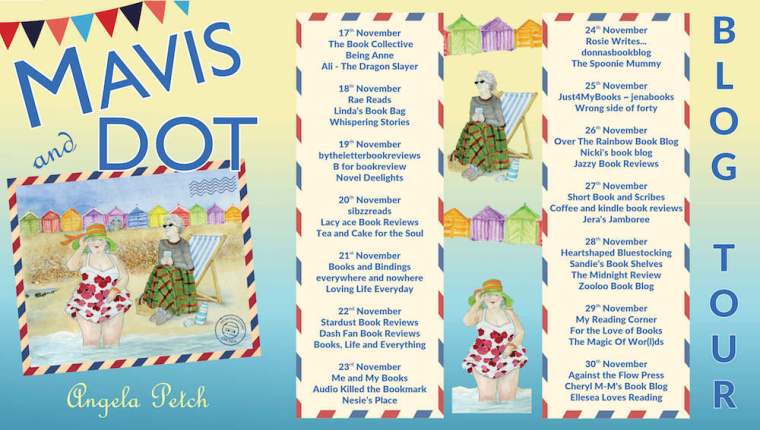