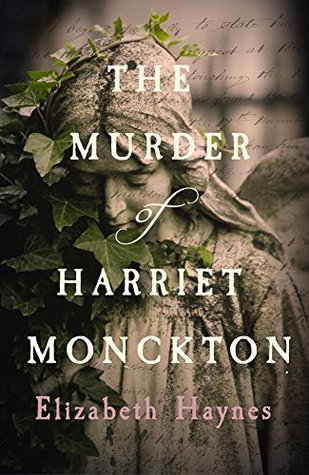 The Murder of Harriet Monckton is based on a true story that shocked and fascinated the nation.

On 7th November 1843, Harriet Monckton, 23 years old and a woman of respectable parentage and religious habits, was found murdered in the privy behind the dissenting chapel she had regularly attended in Bromley, Kent. The community was appalled by her death, apparently as a result of swallowing a fatal dose of prussic acid, and even more so when the autopsy revealed that Harriet was six months pregnant.

Drawing on the coroner’s reports and witness testimonies, the novel unfolds from the viewpoints of each of the main characters, each of whom have a reason to want her dead. Harriet Monckton had at least three lovers and several people were suspected of her murder, including her close companion and fellow teacher, Miss Frances Williams. The scandal ripped through the community, the murderer was never found and for years the inhabitants of Bromley slept less soundly.

This rich, robust novel is full of suggestion and suspicion, with the innocent looking guilty and the guilty hiding behind their piety. It is also a novel that exposes the perilous position of unmarried women, the scandal of sex out of wedlock and the hypocrisy of upstanding, church-going folk.

Wow, wow, wow! What an incredible novel this is!

This is one of those books I saw pass by on Twitter one day and, despite knowing very little about it, promptly decided I’d buy myself a copy. It took exactly one page for me to absolutely fall in love with the Victorian era atmosphere and the wonderful writing.

The Murder of Harriet Monckton is based on a true story. In 1843, 23 year old Harriet Monckton was found murdered in a privy behind a chapel she had attended regularly. The autopsy revealed Harriet was six months pregnant and died due to ingesting prussic acid. Elizabeth Haynes compiled coroner’s reports and witness testimonies to tell Harriet’s story. The novel is told from various points of view by characters who all may have had reason to want Harriet gone from their lives. A former lover, a current lover, a wanna-be lover and a vile, despicable man hiding behind the cloak of piety.

This novel oozes atmosphere from the start, bringing not only the Victorian era to life but also delivering characters that are so realistic they almost jump from the page. It had me completely enthralled from start to finish and not only made me remember why I love historical fiction as much as I do but also re-awakened my sheer passion for reading. This is just plainly the kind of novel my inner bookworm dreams of and it delivered on every level.

My only tiny niggle is that I knew from the start that Harriet’s murder has never been solved. Like with any other murder mystery, I would have liked to have had the opportunity to figure things out on my own and decide on a suspect. It felt rather weird not to be quite able to do that since the killer was never caught. However, as luck would have it, I did actually end up with the same conclusion as the author came up with in her story so it’s not all bad. And none of it ruined my enjoyment of this wonderful novel. I have absolute no doubt this novel will end up in my list of favourite books of the year!

The Murder of Harriet Monckton is available to buy!