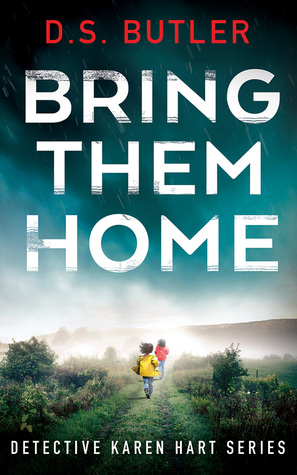 When two young girls disappear from their primary school, the village of Heighington is put on high alert—and not for the first time. Called in to investigate, Detective Karen Hart is sure that parallels with a previous disappearance are anything but coincidental.

DS Hart is still reeling from a case she tried and failed to solve eighteen months ago, when a young woman vanished without a trace. She’s no nearer to the truth of what happened to Amy Fisher, but with two children missing now too, the stakes have never been higher. As she looks to the past for clues, she must confront her own haunting loss, a nightmare she is determined to spare other families.

Hart soon realises that nothing in this close-knit Lincolnshire community is what it seems. Pursuing the investigation with personal vengeance, she finds herself in conflict with her scrupulous new boss, but playing by the rules will have to wait. Because while there’s no shortage of suspects, the missing girls are running out of time…

I do so love storylines involving kidnappings. There’s always this delightful race against the clock to find the victims alive. Tick, tock.

The story starts out exciting enough. Two ten year old girls go missing from school. From the beginning, it’s clear this will be one frustrating investigation. There are no witnesses, no clues and detectives don’t know where to start looking for Emily and her friend Sian. But DS Hart has a suspect in sight early on. Is she distracted by a previously unsolved case though?

Bring Me Home is the first instalment in a brand-new series, featuring Detective Karen Hart. I liked the fact that she isn’t a DI but a DS because, let’s face it, there’s a lot of those around. While a DI might sometimes get away with breaking the rules, DS Hart doesn’t get that opportunity very often, although she gives it a good go, as her boss is always nearby and he’s a stickler for the rules.

Now, as you know, I read a lot of crime fiction and I’m fully aware of the fact that it’s becoming increasingly harder for an author to come up with something new that will either shock or surprise me. So although I thought Bring Them Home wasn’t badly written, it felt a little too much like things that have been done before.

Throughout the story, these characters never really convinced me. On top of that, I found the author tried too hard to dazzle the reader with red herrings and dead ends but deep down, I always felt there was only ever going to be one way the story would end and thus, the conclusion wasn’t unexpected at all.

All in all, a straightforward mystery but to be honest, there are far more better ones out there to sink your teeth into. For me, this ended up being a quick but, sadly, forgettable read.

Bring Me Home will be published tomorrow!

3 comments for “Bring Them Home by D.S. Butler”