Delighted to join the blog blitz for The Paris Secret by Lily Graham today! My thanks to Kim Nash at Bookouture for the invitation to join and my review copy! 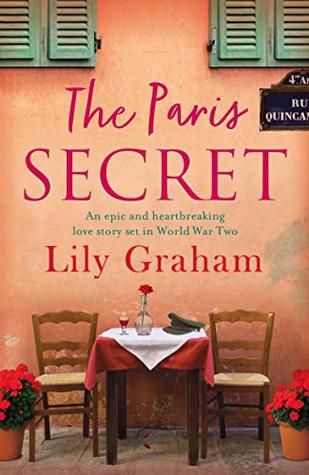 The last time Valerie was in Paris, she was three-years-old, running from the Nazis, away from the only home she had ever known.

Now as a young woman, Valerie must return to Paris, to the bookshop and her only surviving relative, her grandfather Vincent, to find out what really happened to those she loved. As she gets to know Vincent again, she hears a tragic story of Nazi occupied Paris, a doomed love affair and a mother willing to sacrifice everything for her beloved daughter.

Can Valerie and Vincent help each other to mend the wounds of the past? Valerie isn’t after a fairy-tale ending, she only wants the truth. But what is the one devastating secret that Vincent is determined to keep from his granddaughter?

On a train journey from Moscow to Paris, Annie meets Valerie. The two ladies get along really well, despite their age difference, and soon Valerie tells Annie the most heartbreaking story.

Valerie was born during the second World War in Paris. When she was three years old, she was sent to live in England with a family member she didn’t know after her parents died. But why did her grandfather, Vincent, send her away? Didn’t he want her?

As a young woman in the 1960’s, Valerie returns to Paris to find her grandfather in order to maybe strike up some sort of relationship with him but more so, to discover what happened to her parents and why she was sent away.

The Paris Secret lays bare events set during the war I never really thought about. Despite wanting to say much more on that subject, I really can’t because it would ruin everything for you, the reader. Suffice to say I found it truly thought-provoking and immensely sad.

While Valerie is a most likeable character, it was Vincent, the curmudgeonly and grumpy grandfather, who stole my heart from the beginning. He runs a bookshop but the way he treats his customers is far from ideal. Yet they keep coming back for more and I often found myself chuckling at Vincent’s ideas about the books in his shop. Which made what I learned about him afterwards even more heartbreaking and I really felt for him.

This story had me engrossed from start to finish. The setting in Paris oozes atmosphere and the threat of the Germans invading every aspect of daily life while the French government had all but deserted their citizens felt all too harrowing. It’s always so easy to forget that there were many different casualties of war, but also that not all Germans were bad. This is something that always hits close to home for me as my grandmother was German. She suffered just as much, although few people understood that.

The Paris Secret is a story about love, family and bravery in the darkest of times. Sometimes emotional, sometimes rather witty with characters that will find their way into your heart from the start. An absolutely beautifully written and wonderfully captivating story about one of the darkest periods in our history.

The Paris Secret is out today!

Former journalist, Lily Graham grew up in South Africa, and spent much of her childhood buried inside the covers of a book. Her adulthood has passed no differently. Except that now she occasionally gets to make up some of the stories for a living. She is happy to report that most of her neighbours think of her as a cheerful layabout and no amount of protesting that lazing about in her pyjamas is actually ‘work’ she is never taken seriously. She lives in West Sussex with her husband and her beloved bulldog, Fudge.

Lily is the author of five novels, including THE ISLAND VILLA. All her books have entered the Amazon Top 100 bestseller list.  THE PARIS SECRET is published on 4th October 2018.