Ridiculously excited to finally be able to share my review for The Birthday by Carol Wyer on the blog blitz today! My thanks to Kim Nash at Bookouture for the invitation to join and for my review copy, which I received via Netgalley. 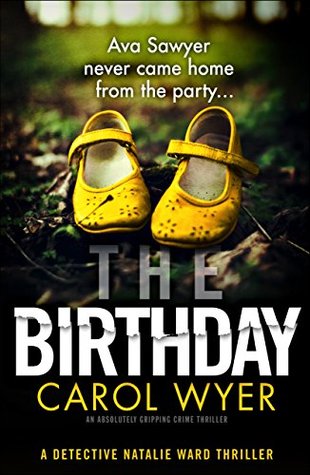 When five-year-old Ava Sawyer goes missing from a birthday party at a local garden centre, the police are bewildered by the lack of leads. That is until two years later, when Ava’s body is found and another little girl, Audrey Briggs, goes missing. Audrey also attended that party …

Leading the investigation is Detective Natalie Ward . A mother of two teenagers, this case chills her to the bone, and is a disturbing reminder of the last job she worked on. One that ended very badly.

Natalie soon discovers that Ava’s mother has some worrying gaps in her alibi and as she digs deeper, she’s sure Ava’s father is not telling the full story. And what did the owner of the garden centre Elsa see that day? Something that she’s not telling Natalie …

Just as Natalie is facing up to the grim possibility that Ava and Audrey were killed by someone close to home, another little girl from the party doesn’t come home from her ballet lesson. Can Natalie find a way to stop this killer before more innocent lives are taken?

Having been a massive fan of Carol Wyer’s other series centred around Robin Carter, I was slightly wary about her tackling a new crime fiction police procedural. Not because of her writing, which I knew would be brilliant, but because of meeting new characters and wondering if I’d even like them after becoming so invested in Robin and her team.

Five year old Ava Sawyer goes missing from a birthday party at a garden centre. Despite an intensive investigation, Ava is not found. Two years later, builders find her body. DI Natalie Ward and her team are given the case but just when they think they are dealing with a cold case, another girl who attended that same birthday party goes missing. Coincidence? If so, why now? Is the same person responsible? Are these two events connected in any way or not?

Natalie Ward is a wife, a mother and a detective inspector. With so many balls to juggle, it’s easy to see why not everything is all sunshine and flowers in her life. Leading an investigation into missing children is always hard but for Natalie even more so, as she’s still suffering effects from a previous investigation that ended badly. Determined not to make the same mistakes again, she’s incredibly meticulous and working long hours to stop another child from being taken. But the culprit is on a mission and the clock is ticking.

A new team of detectives to get acquainted with then and I must say, this one works really well again. There’s enough diversity, determination and banter to give you a good feel of the team dynamics. These characters completely won me over and I really look forward to getting to know them all better.

With The Birthday, Carol Wyer once again delivers all the goodness I’ve come to expect from her. There are a few chapters delving into the background of the culprit that lead you to that point of almost, but not quite, sympathising with them. Chapters that will have you looking for clues, trying to figure things out before the big reveal. The investigation is incredibly gripping, albeit frustrating for the detectives, and I was left guessing until the end as to the identity of Ava’s killer. Not that I didn’t have a list of suspects as long as my arm but I was hit with dead end after dead end and true to form, got it utterly wrong. On top of that, the heartbreaking moments when families need to be informed. The devastation, the various ways people deal with the grief … it almost made me quite emotional.

It seems everything Carol Wyer touches turns to gold. She most definitely knows how to write an addictive and tense page-turner and this one is no different. Compelling from the first page, this will have you hooked in a heartbeat. The DI Natalie Ward is a fantastic start to what I’m sure will be an exciting new series. Will Natalie ever find the perfect balance between her job and her private life? And what other crimes will be coming her way? I can’t wait to find out!

The Birthday is available to buy!

Carol Wyer garnered a loyal following as an author of romantic comedies, and won The People’s Book Prize Award for non-fiction (2015). In 2017 she stepped from comedy to the “dark side” and embarked on a series of thrillers, featuring the popular DI Robyn Carter, which earned her recognition as a crime writer.

The Staffordshire-based writer now has more crime novels in the pipeline, although she can still sometimes be found performing her stand-up comedy routine Laugh While You Still Have Teeth. 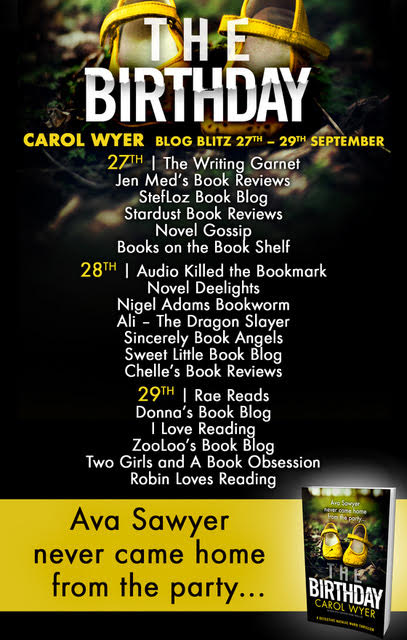