Today, it is my pleasure to host a stop on the blog tour for Daisy Belle by Caitlin Davies! My thanks to Anne Cater at Random Things Tours for the invitation to join. Author Caitlin Davies visits the blog to talk about the two inspirational women this novel is a tribute to, but first here is what Daisy Belle is all about. 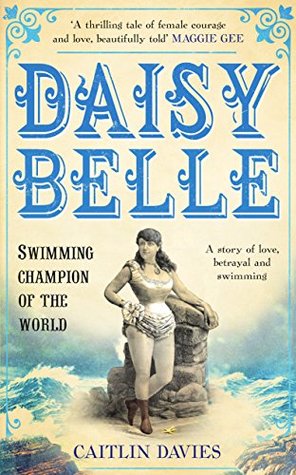 Summer 1867: four-year-old Daisy Belle is about to make her debut at the Lambeth Baths in London. Her father, swimming professor Jeffery Belle, is introducing his Family of Frogs – and Daisy is the star attraction. By the end of that day, she has only one ambition in life: she will be the greatest female swimmer in the world.

She will race down the Thames, float in a whale tank, and challenge a man to a 70-foot high dive. And then she will set sail for America to swim across New York Harbour.

But Victorian women weren’t supposed to swim, and Daisy Belle will have to fight every stroke of the way if she wants her dreams to come true.

Inspired by the careers of Victorian champions Agnes Beckwith and Annie Luker, Daisy Belle is a story of courage and survival and a tribute to the swimmers of yesteryear.

There are two inspirational women behind the story of Daisy Belle: Swimming Champion of the World, and the first is Agnes Beckwith.

I first came across her about eight years ago. I was researching a book on the history of outdoor swimming on Hampstead Heath in north London, when I saw a Victorian poster held by the British Library.

It was advertising an aquatic performance at the Royal Aquarium in 1885 and it showed Agnes Beckwith resplendent in a white satin costume, stockings and boots, one arm resting casually on a rock. Just behind her in the water a man had both arms raised in the air, his mouth open in alarm, presumably in the process of drowning.

Then I read a brief reference to a swim Agnes had completed in September 1875, when at the tender age of 14 she had plunged into the Thames at London Bridge and swum all the way to Greenwich. When I then went on to write Downstream, a history of Thames swimming, I had the chance to further explore her career.

That’s when I realised just what a trailblazer she had been – no one had ever made a public swim of this length in the River Thames before, not even the great Channel champion Captain Matthew Webb. Yet virtually no one has heard of Agnes Beckwith today. So I decided to write a novel, a fictionalized life story inspired by her incredible career.

Agnes Beckwith was born in Lambeth, south London, in 1861. Her father Frederick is believed to have come from Ramsgate in Kent, and he was a leading swimming professor and English professional champion. By the time of Agnes’ birth, he was swimming master at the Lambeth Baths and his ‘Family of Frogs’ started giving public displays in the early 1860s.

At the age of nine Agnes was performing with her brother Willie, himself a champion swimmer, as ‘Les Enfants Poissons’ in a plate-glass aquarium at the Porcherons Music Hall in Paris. All seven of Frederick’s children were involved in his aquatic galas; his second wife Elizabeth (whom he married in 1876 after Agnes’ mother died) played the piano during shows, while his daughter Lizzie went on to became a renowned swimmer and performer.

Agnes Beckwith completed several record-breaking swims in the River Thames, including 20 miles in 1878. She then formed her own ‘talented troupe of lady swimmers’ and travelled the country giving exhibitions. In September 1880 she spent 100 hours submerged in a whale tank at the Royal Aquarium, eating her meals in the water and reading daily accounts of her swim in the press.

Two years later she was being billed as ‘the premier lady swimmer of the world’ before setting off on a tour of the United States. In June 1883 she declared her intention to swim from Sandy Hook in New Jersey to Rockaway Pier in New York.

Returning to England, Agnes continued to take part in shows with her family and was still holding exhibition swims in the early 1900s, now married to theatrical agent William Taylor. Their son William performed alongside his mother as ‘the youngest swimmer in the world’.

Daisy Belle: Swimming Champion of the World was also inspired by another forgotten Victorian superstar – Annie Luker. She was born in 1870 in Oxfordshire, and she too was the daughter of a swimming professor. Annie started out as a river swimmer and in 1892 she attempted to swim nearly 19 miles from Kew to Greenwich to establish a claim to ‘the female championship of the world’.

Two years later she was ‘World Champion High Diver’, performing at the Royal Aquarium where she plunged 70 feet into a tank containing just eight feet of water. Annie Luker successfully challenged a male diver, Professor O’Rourke, and remained at the Royal Aquarium for six years, as well as training female divers.

According to family lore, Annie Luker was later arrested as a suffragette after a protest dive off a bridge in London and imprisoned in Holloway, under the name Annie Parker.

I wanted to write this novel as a tribute to women like Agnes Beckwith and Annie Luker because they are yet to be properly recognised. There has been no induction into any swimming Hall of Fame, and yet what they did and the prejudice they overcame made it possible for women to swim and dive today.

[They really are the most amazing inspirational ladies and they deserve this tribute. Thank you so much for visiting and telling us their stories, Caitlin!]

Caitlin Davies was born in London in 1964. She spent 12 years in Botswana as a teacher and journalist and many of her books are set in the Okavango Delta, including a memoir Place of Reeds, described by Hilary Mantel as ‘candid and unsentimental’.

Her novels include The Ghost of Lily Painter, a fictional account of the arrest and execution of two Edwardian baby farmers, and Family Likeness about the fate of ‘war babies’ born to African American GI fathers in England during World War Two.
Her non-fiction books include Taking the Waters: A Swim Around Hampstead Heath, a celebration of 200 years of outdoor bathing, an illustrated history of the world famous Camden Lock Market, and Downstream: a history and celebration of swimming the River Thames.

Her latest non-fiction is Bad Girls, and her latest novel is Daisy Belle: Swimming Champion of the World, based on the lives of several Victorian aquatic stars, to be published by Unbound on September 1, 2018.

She is also a teacher and journalist, and was a regular feature writer for The Independent’s education and careers supplement. From 2014-17 she was a Royal Literary Fund Fellow at the University of Westminster, Harrow, in the faculty of Media, Arts & Design.