Delighted to join the blog tour for Before Her Eyes by Jack Jordan today! My thanks to Kirsty Doole at Corvus for the invitation to join and for my review copy! 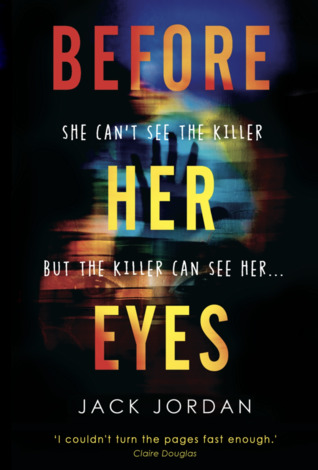 Naomi Hannah has been blind since birth. Struggling with living in the small, claustrophobic town of Balkerne Heights, Naomi contemplates ending her life. But before she can, Naomi stumbles across the body of a young woman who has been brutally murdered. She senses someone else there at the scene – watching her. Naomi may not be able to see the killer’s face, but she is still the only person who can identify him.
For Naomi, this frightening truth changes everything: she realises that she wants to live, at the very point at which her life is in greatest peril.

As the police begin hunting the person responsible and the bodies pile up, Naomi must lie in wait and answer the question that hangs her fate in the balance: why did the killer let her live?

In a town this small, the murderer must be close, perhaps even before her very eyes…

Well hello, Jack Jordan! So, we finally meet. So to speak. I’ve heard a lot about you (all good, I promise) and I figured it was about time I introduced myself to your books. But I had no idea that that cutsie smile you so often display hides such an incredibly devilish brain!

Naomi Hannah has been blind since birth. One day, while walking down a dark and icky alley, she stumbles upon the body of a young woman who has been brutally murdered. Naomi can sense she’s not alone and while she may not be able to see the killer, she could very well be the only person able to identify them. But why did the killer let her live? And is there a connection to the disappearance of another young woman years ago?

The prologue alone already sent shivers up and down my spine. There’s a delightful creepy sort of vibe throughout the story, helped enormously by the fantastic writing as Jack Jordan really brings home what it’s like to be blind. It felt almost claustrophobic. It definitely felt incredibly scary and that’s without thinking there’s a psychopath after you.

Now, I must admit that Naomi often made me feel like I was watching one of those old slasher type movies. You know, the ones where you find yourself yelling “don’t open the bloody door!!!!!”. Some of the decisions she made seemed a bit dubious to me but hey, I’m not blind (thank goodness) so what do I know.

I couldn’t at all guess at the outcome. Although I had a wee nugget of an idea in my head and I felt rather smug when it looked like I might be right. But then …. those final pages turned the whole thing onto its head and I actually gasped out loud. Talk about being blindsided and sucker punched. Fabulous!

Before Her Eyes is chilling, disturbing, dark and brilliantly addictive. A delicious page-turner that will have you flipping/swiping the pages faster as you go, biting your nails before ending up utterly floored and exhausted.

I suppose you could say my first outing with Jack Jordan went rather well and I quite look forward to hanging out with him again. And by hanging out, I obviously mean read his other books as I’m not entirely sure I’d want to get too close to that devious mind. 😉

Before Her Eyes is available to buy!

To find out more about Jack, enter numerous annual giveaways to win signed copies of his books, and be one of the first to hear of new book releases and news, follow him here: 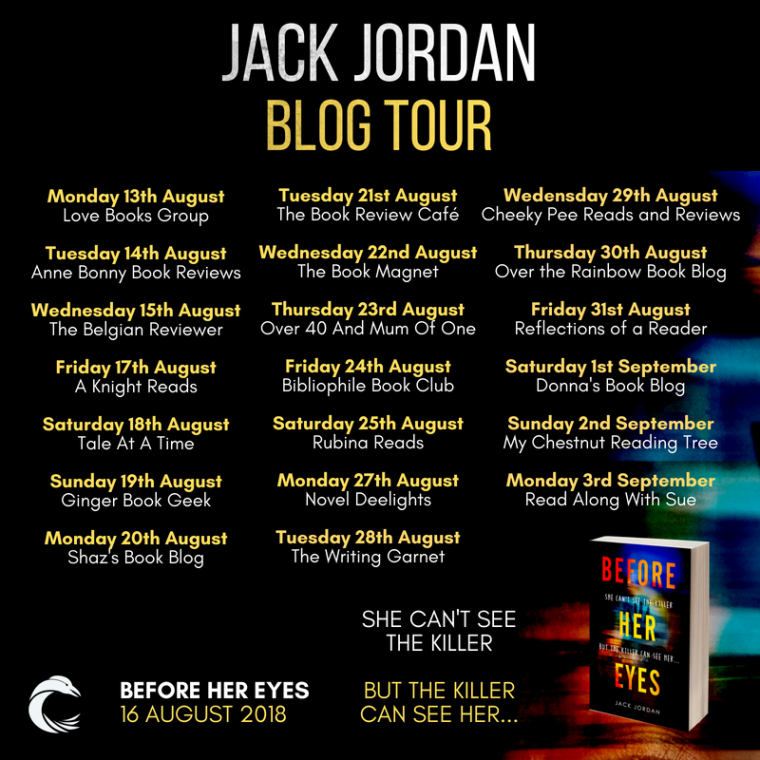