Delighted to join the blog tour for The Secret by K.L. Slater today! My thanks to Kim Nash at Bookouture for the invitation to join and for the review copy, which I received via Netgalley. 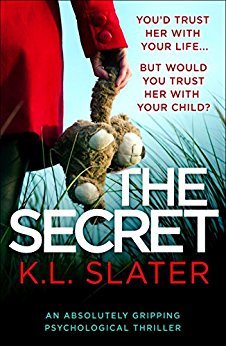 Louise is struggling to cope.  As a busy working mum, she often has to leave her eight-year-old son Archie at her sister Alice’s flat.

Alice and Louise used to be close.  But there’s a lot they don’t know about each other now – like the bottle of vodka Louise hides in her handbag, Alice’s handsome new friend and the odd behaviour of her next-door neighbour.

Archie is a curious little boy. He likes to play on his own at his auntie’s flat until one day when he sees something he shouldn’t. Now he has a secret of his own.  One he can’t tell his mum. One that could put him and his family in terrible danger.

I do so enjoy Kim Slater’s books. I’ve come to rely on her to always deliver a great twisty and tense psychological thriller that’ll keep me entertained for hours and The Secret did exactly that.

The prologue already sent a chill down my spine when Archie stumbles upon something he wasn’t supposed to see. Eighteen months later, eight year old Archie is still fiercely holding on to the secret but things are starting to take its toll.

For the most part, The Secret is a cleverly constructed and character-driven story centred around two sisters, Louise and Alice. Theirs is a complicated relationship that is seemingly fuelled by jealousy. It was hard not to choose a side and I admit I did so from quite early on. My sympathies were very much with Alice and despite the obvious baggage that Louise is carrying around with her, I disliked her immensely.

More than anything though, the character I’m sure you too will be rooting for until the very end is Archie. He’s quite obviously a troubled little boy, doesn’t seem to have any friends and the only place where he really comes to life and shows the kind of boy he is, is when he’s staying with his Auntie Alice. He just really captured my heart.

The Secret is quite a slow-burner. Although there are some twists, I felt the majority weren’t meant to dazzle and leave you wondering what the heck just happened. They feel immensely natural to the story and up to a point even rather realistic and believable. The characters sure are and I became incredibly immersed and invested in their lives. The big mystery about the secret Archie is keeping isn’t revealed until the end and what an utterly shocking ending it is too! Now that one I didn’t see coming at all!

So, intriguing characters, a mystery to solve, suspense and a jaw-dropping ending! What more could you possibly want?

The Secret is available to buy!

Kim is the bestselling author of psychological crime thrillers ‘Safe With Me,’ ‘Blink,’ ‘Liar,’ ‘The Mistake’ and ‘The Visitor.’ Her latest thriller, ‘The Secret’ will be published by Bookouture on 27th July 2018 and is now available for pre-order.

Kim’s titles are soon to be published in paperback by Sphere in the UK and Grand Central in the USA.

For many years, Kim sent her work out to literary agents and collected an impressive stack of rejection slips. At the age of 40 she went back to Nottingham Trent University and now has an MA in Creative Writing.

Before graduating in 2012, she received five offers of representation from London literary agents and a book deal which was, as Kim says, ‘a fairytale … at the end of a very long road!’

Kim is a full-time writer, has one grown-up daughter, Francesca, and lives in Nottingham with her husband, Mac.