Thrilled to kick off a the blog blitz for Nobody’s Child by Victoria Jenkins today, alongside the fabulous Sweet Little Book! My thanks to Noelle Holten at Bookouture for the invitation to join and for the review copy, which I received via Netgalley.

On a damp October day, a body is found in an abandoned hospital, too burnt to be identified, but Detective Alex King knows that every victim is someone’s daughter or son.

Pushing aside her own troubles, Alex puts everything into finding the killer, but when someone else is found dead, she begins to suspect that the body in the hospital was just the first of many.

Just as Alex uncovers a heart-breaking link between the victims, she finds her own safety under threat. Is this a figure from her past hell-bent on revenge, or could the murderer be even nearer than she thinks?

Alex is running out of time. Can she catch the killer before they take another life, or will they get to her first?

Cor! Talk about a gripping crime story! WOO! What a corker!

If there’s a class somewhere that teaches an author how to write a prologue that will hook a reader from the get-go and leave them wanting more, I’m pretty sure Victoria Jenkins graduated with the highest honours. Those first few pages already had me on the edge of my seat and I knew I should strap myself in for yet another thrilling ride with Detectives King and Lane.

What to say about the case the detectives are working on. Good grief! Any attack is of course incomprehensible but these are even more vile and reprehensible because while they seem random, the victims are all vulnerable in one way or another. A body is found badly burned after a fire in an abandoned hospital. Identification is impossible. Who was this person and why were they targeted? Meanwhile someone also seems to have their sights set on Alex King. Plenty going on then in this story!

This third instalment in the series also sees tensions rise between Alex and Chloe, putting their friendship to the test. I must admit that this time around, both these fierce ladies managed to get on my nerves somewhat. Alex with her need to try and hide things, knowing fully well she’s not very good at it and Chloe with her incessant questions that made me want to slap her and tell her to let it go already.

I quite quickly had a potential suspect in mind but the ultimate reveals, yes plural, left me utterly reeling! And also quite sad because a lot of lives are affected and it takes a cold person not to become invested in them. That ending nearly broke me and left me with a huge lump in my throat.

Once again, Victoria Jenkins manages to come up with an insanely compelling and addictive page-turner. I remember telling myself when I picked up the first book that I needed to get hooked on another series like a hole in the tooth but within those first pages, I knew I was on to a good thing and now, three books in, I know I made the right decision. This series keeps getting better and better and the author yet again delivers an amazingly well crafted plot with interesting and fabulous characters and a multi-layered, suspenseful investigation. Bring on book four! I can’t wait!

Nobody’s Child is available to buy!

Victoria Jenkins lives with her husband and daughter in South Wales, where her series of crime novels featuring Detectives King and Lane is based. Her debut novel The Girls in the Water is an Amazon UK top 30 bestseller, and top 5 bestseller in the Amazon US chart.

The third book in the King and Lane series, Nobody’s Child, is out now! 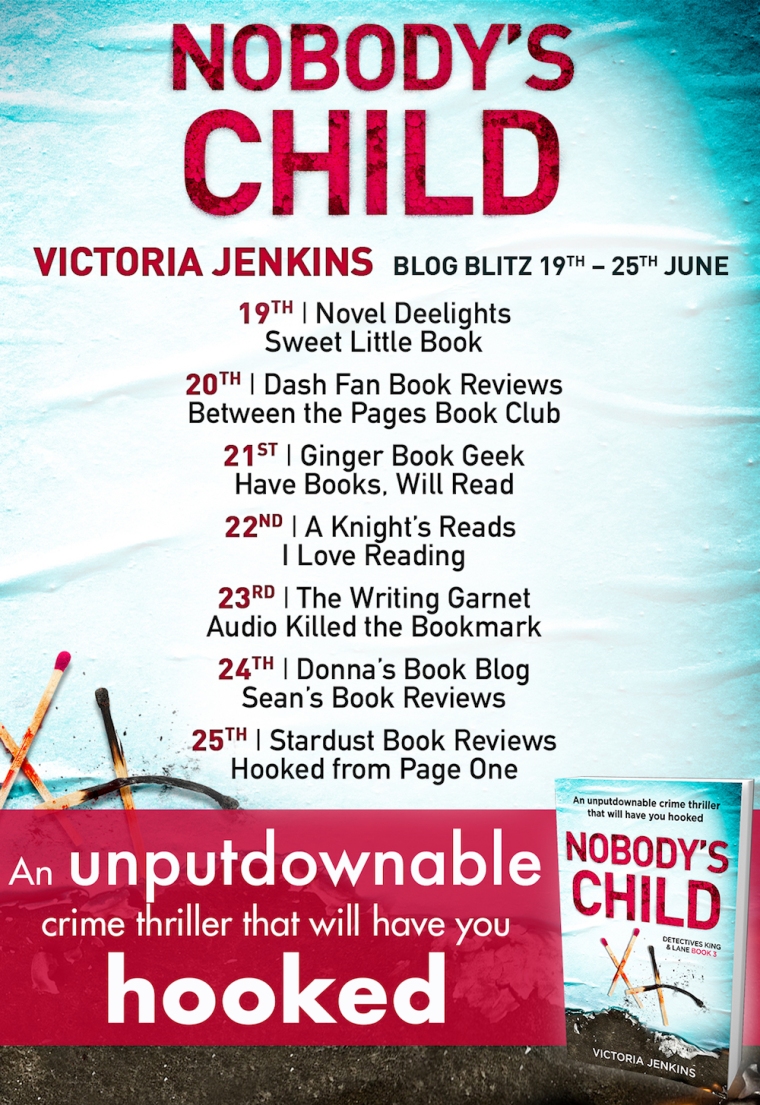