It’s a pleasure to welcome you all to my stop on the blog blitz for Gracie’s Secret by Jill Childs today! My thanks to Kim Nash at Bookouture for the invitation to join and the review copy, which I received via Netgalley. 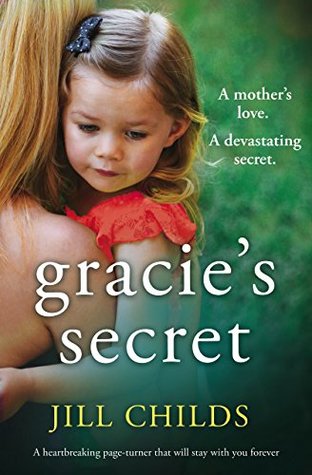 Time stops for Jen when her beloved daughter, Gracie, is involved in a terrible car crash. Pronounced dead at the scene, it’s a miracle when paramedics manage to then resuscitate the little girl.

The relief Jen feels at Gracie’s recovery is matched only by her fury at the driver of the car – her ex-husband’s new girlfriend Ella. Jen has never trusted Ella, and now her worst fears have been confirmed.

But then Gracie begins to tell strange stories about what she heard in the car that day, and what she saw in those moments near death. It’s clear that there’s something shocking hidden in Ella’s past… but exposing it could tear all their lives apart.

Jen receives a phone call all mothers dread. Her three year old daughter Gracie has been in a traffic accident and is in a coma. Now, you can see from the book description that Gracie recovers but she’s a bit different as she seems to be able to remember things she shouldn’t. Everything points to Ella, the woman who stole Jen’s husband and the driver of the car Gracie was in.

I must say I wasn’t entirely prepared for how this story unfolded and I think a lot of your enjoyment will depend on whether or not you believe in that big, bright light at the end of the tunnel and angels. If you put that aside though, Gracie’s Secret is centred around a mystery and a mother’s love. There’s no hardship in sympathising with Jen when her daughter starts saying all kinds of weird things. As a single mother, she has nowhere to turn to. Her ex-husband is far too busy keeping his new girlfriend happy.

The story is mostly told through Jen but sometimes we get a few glimpses from Ella’s point of view. Obviously, Jen hates the woman who took her husband from her and is quick to jump onto anything that will prove her point. I must say I didn’t really take to Ella myself and while there is a moment where I felt I should have at least sympathised with her, by that point I was a bit tired of her playing the “victim card”. I’m putting that in between quotation marks because that may just be me and she may not come across like that to other readers.

What starts out rather emotionally quickly takes a more sinister turn. There are lies and secrets to uncover and Jen will discover not all is at it seems. Personally I found a few things to be a bit on the predictable side but ultimately, Gracie’s Secret is about the things a mother will do to keep her child safe.

This is a story about deceit, manipulation, betrayal and the unbreakable bond between mother and child. Sometimes moving, sometimes suspenseful and with quite the unexpected ending that, while somehow perfect, also made me rather sad.

Gracie’s Secret is available to buy!

Jill has always loved writing – real and imaginary – and spent 30 years travelling the world as a journalist, living overseas and reporting wherever the news took her. She’s now made her home in London with her husband and twin girls who love stories as much as she does. Although she’s covered everything from earthquakes and floods, riots and wars, she’s found some of the most extraordinary stories right here at home – in the secrets and lies she imagines behind closed doors on ordinary streets, just like yours.