Such a pleasure to host a stop on the blog tour for Body Heat by Candy Denman today. My thanks to Anne Cater for the invitation to join and to the publisher for my review copy! 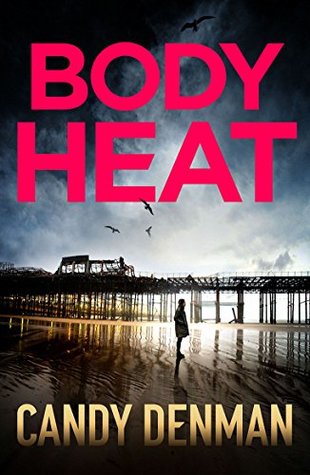 The second in the Dr Jocasta Hughes sees the Hastings Forensic Medical Practitioner faced with a gruesome series of murders which leave the remains of the victims twisted and charred. The hunt heats up for the arsonist, and so does Jo’s relationship with the exasperating DI Miller. A chilling mystery with lead characters you will want to spend more time with, and a murderer you would definitely want to avoid.

Body Heat is the second book in the Jocasta Hughes series, which I didn’t realise but it doesn’t matter as I had no problem at all getting immersed and following along.

Dr Jocasta Hughes, or Jo, is a part-time GP and part-time Forensic Consultant for the Hastings police department. This includes confirming a person is dead, for instance, or making sure someone held in a police cell is fit to be interviewed. I took to Jo right away. She’s an intelligent and determined woman, who’s always looking out for the people around her.

The action starts pretty much on the first page which is one sure-fire way to hook your readers from the get-go. When the body of a woman is found burned to death in an abandoned car, Dr Hughes is called out to the scene to confirm the woman is indeed dead. Little does she know this victim will not be the last one as the killer is most definitely on a mission.

During the investigation, one suspect is a young man who clearly has a learning disability. It was this part of the story that really grabbed me. The relentlessness of detectives as they go out of their way to get a confession made for quite an emotional read at times. This is also where Jo gets involved, as an appropriate adult and making sure her patient is as well as he can be.

Having the main character be a doctor and not an investigator is both incredibly refreshing and also slightly frustrating as I felt I was increasingly left out of the excitement of a murder case since Jo is rather on the fringes of it all. Sure, she has her sources and people willing to partake in a bit of gossip but it’s a bit different from being right there in the middle of the action of an investigation.

As for the killer, I was convinced I had it all figured out quite early on. I was wrong. Again. I’d make a horrible detective. It wasn’t until the final pages that the pieces of the puzzle came together. This is one seriously chilling killer and his choice of murder is quite horrendous.

Body Heat is a gripping and compelling serial killer mystery. I thoroughly enjoyed the balance between a murder investigation, Jo’s work at the GP surgery and her personal life including her parents, her best friend and the “will-they, won’t-they” relationship with Steve Miller. I feel this would make quite a fabulous tv series, as it goes. It was a delight meeting the entire cast of characters, even Jeffries, and I look forward to reading more about them in future. Might be a while until I have me some crispy bacon again, though.

Body Heat is available to buy!

Candy Denman trained as a nurse, and worked in the NHS almost all her life, until recently managing to disengage herself in order to become a full-time crime writer. She has also written a number of scripts for such highly-acclaimed TV series as The Bill and Heartbeat.