Its such a pleasure to welcome you all to my stop on the blog blitz for If Fear Wins by Tony J. Forder. My thanks to Sarah Hardy for the invitation and Bloodhound Books for my review copy, which I received via Netgalley. 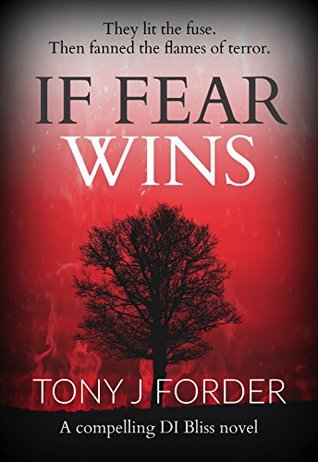 When a torched body is found in a country lane, DI Bliss and Chandler are called in to investigate.

The detectives are drawn towards recent missing person reports and believe their victim will prove to be one of them. Bliss thinks he knows which, and fears the outcome if he is proven right.

Soon the body is identified, and Bliss and Chandler discover evidence suggesting this murder might be a terrorist attack.

Meanwhile, someone from Bliss’s past needs his help, and soon he is juggling his personal life with the demanding case. To make matters more complicated, MI5 and the Counter-Terrorist Unit are called in to help solve the case. But are they on the right track?

Bliss and Chandler soon find themselves in a race against time, and this might just be their most challenging case yet…

When a torched body is found, DI Bliss and Chandler are called in to investigate. Consulting their list of recent missing persons, DI Bliss quickly thinks he knows who the victim is. The evidence points to a terrorism attack. Or is that what investigators are merely meant to believe?

Meanwhile, someone from Bliss’ past makes a rather surprising appearance. This friend’s husband recently apparently committed suicide by jumping off a bridge but Bliss’ friend is convinced her husband would never do such a thing. Throw in some MI5, MI6 and a Counter-Terrorist Unit and Bliss sure has his work cut out!

Here’s a wee warning. Don’t be eating anything when you start this book. I promise you, your appetite will be gone in a flash. This is one of the most disturbing murder scenes I’ve ever read about. It made for some seriously uncomfortable reading and it’s definitely one I won’t be forgetting in a hurry. The setting is quite obviously meant to point a certain way but DI Bliss is suspicious about some rather convenient factors. Can he convince his superiors though?

True to form, Tony J. Forder once again delivers an incredibly multi-layered crime fiction story with various threads you feel should somehow be connected but there’s no way in high heaven you’ll figure out how. Or that’s what happened to me anyway. I was left guessing until the end as the author took me on a gripping journey through the criminal world in Peterborough. DI Bliss remains as determined as ever and I love how sometimes all that’s needed is that copper’s instinct, that gut feeling that something isn’t quite as it seems no matter what the evidence says.

This is the third instalment in the DI Bliss series. I think you can safely get away with treating this as a stand-alone but for the full experience, start at the beginning. You’ll notice, I’m sure, that this series is only getting better. The author has a firm grip on things that make a good crime story compelling. From well-developed characters to an intelligently plotted storyline and intriguing investigations, there’s a great deal to keep you hooked here.

If Fear Wins is available to buy!

Tony J Forder is the author of the critically acclaimed crime thriller series featuring detectives Jimmy Bliss and Penny Chandler. The first two books, Bad to the Bone and The Scent of Guilt, will be joined in the series on 29 May 2018 by If Fear Wins.

Tony’s dark, psychological crime thriller, Degrees of Darkness, featuring ex-detective Frank Rogers, was also published by Bloodhound Books. This was intended to be a stand-alone novel, but Tony is now considering the possibility of a follow-up.

One book that will definitely see a sequel is Scream Blue Murder. This was published in November 2017, and received praise from many, including fellow authors Mason Cross, Matt Hilton and Anita Waller.

Tony lives with his wife in Peterborough, UK.