Thrilled to join the blog tour for Wrong Way Home by Isabelle Grey today! My thanks to Anne Cater at Random Things Tours for the invitation and to the publisher for my review copy!

Everyone in Southend remembers the night of the fire. Two lives were saved from the burning Marineland resort, while metres down the beach another was lost when a young woman was raped and murdered. The killer was never found. Now, twenty-five years on, DI Grace Fisher is handed new DNA evidence that could blow the cold case wide open. But what are the chances of really getting to the truth after all this time?

Meanwhile, eager would-be journalist Freddie Craig decides to prove himself by conducting his own investigation and turning his findings into a podcast. It will be good for his CV, and maybe he’ll even make a breakthrough in the case… Experienced hack Ivo Sweatman is flattered when the cub reporter turns to him for advice, but as Freddie becomes more obsessed with the case, Ivo starts to worry that the line between fact and wishful thinking is becoming dangerously blurred.

Just as a series of revelations lead Grace to believe the case is closed, a similar murder is committed. Does she have the wrong man? Or are there two separate killers to deal with?

How did I not know about this series?!

Wrong Way Home is the fourth instalment in the DI Grace Fisher series, a wee detail I didn’t actually know when I signed up for the blog tour. So once again, I find myself breaking my own rule of never starting a series anywhere else but with book one. Luckily, for me, this reads perfectly well as a stand-alone. There may have been a few tiny references to things I didn’t know anything about but as far as background goes, I’d say Isabelle Grey does a great job of hooking new readers without making them feel they are missing out on a truckload of information.

I came to the conclusion a little while ago that I actually really like reading stories about cold case investigations and this one was truly as gripping as gripping can be! Twenty-five years ago, a huge fire and the murder of a nineteen year old girl rocked the community of Southend. The killer was never caught but now, new DNA evidence may just bring DI Grace Fisher and her team a little closer to finding out what happened that night. But after all this time, is the killer still even alive? And if by chance there were any witnesses, how much do they even still remember?

On that same fateful night, Freddie Craig was born. He seems to feel there is some sort of cosmic connection between his birth and the death of the young woman all those years ago. Through a series of podcasts, he sets out on his own investigation into the murder and the mind of a rapist and murderer. Local reporter Ivo Steadman is happy to help out this budding journalist but things quickly turn rather creepy.

From corruption, to murder, to dysfunctional families, this story offers a lot of juicy stuff to sink your teeth into. What struck me the most though, is how Isabelle Grey never loses track of the victims in all of this. How events have affected them, how they’re dealing (or not dealing) with things. It added an extra layer you don’t always find in this genre, which I found just as absorbing as the actual investigation.

Wrong Way Home is a deeply compelling and engrossing crime fiction story. I really enjoyed my first introduction to DI Grace Fisher, although I must say that for a super investigator, she often seemed to jump to conclusions without any proof concerning more private matters and there was one colleague I felt quite bad for. She and her team work incredibly well together on the whole though, complimenting each other and all the while talking things through. The investigation wasn’t at all as straightforward as I thought it would be when I first started reading. Many times, I was convinced I had the whole thing figured out, only to be proven wrong.

This is a thrilling, compelling and utterly addictive story that I found pretty hard to put down. I’m incredibly glad I discovered this series now and I’m determined to catch up on the previous three books as soon as I can. Even though I really need another series like a hole in the tooth, I’ll gladly make some space on the shelf for this one!

Isabelle Grey is a television screenwriter whose credits include Jimmy McGovern’s BAFTA award-winning Accused: Tina’s Story as well as over thirty-five episodes of Midsomer Murders, Casualty, Rosemary and Thyme, The Bill and Wycliffe.

She has also written non-fiction and been a magazine editor and freelance journalist.

Isabelle’s previous novels include two psychological thrillers, The Bad Mother and Out Of Sight as well as the first three books in the DI Grace Fisher series, Good Girls Don’t Die, Shot Through the Heart and The Special Girls. Isabelle grew up in Manchester and now lives in north London. 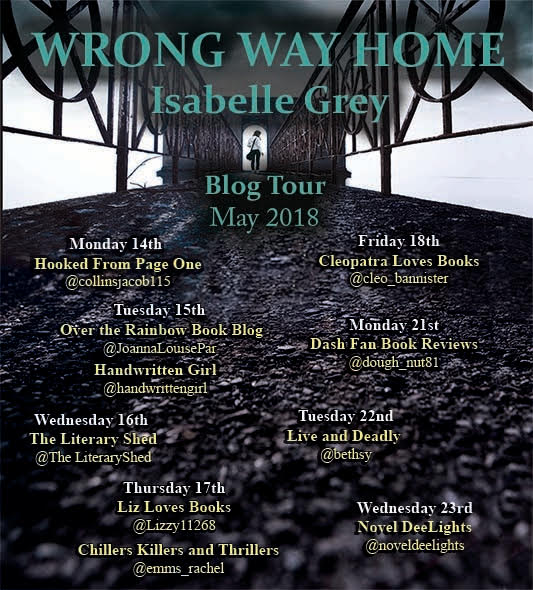