I am beyond excited to be kicking off the blog blitz for Dying Truth by Angela Marsons today, alongside a bunch of amazing bloggers! Make sure you check out their stops as well!

Happy publication day, Angela! And huge thanks to Kim Nash at Bookouture for the invitation and my review copy! 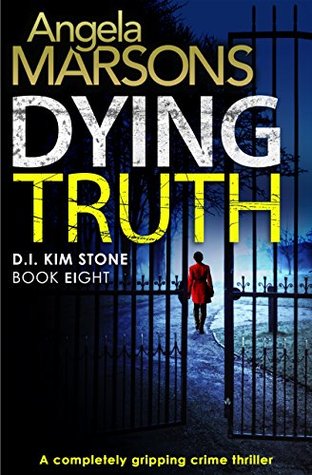 How far would you go to protect your darkest secrets?

When teenager Sadie Winter jumps from the roof of her school, her death is ruled as suicide – a final devastating act from a troubled girl. But then the broken body of a young boy is discovered at the same school and it’s clear to Detective Kim Stone that these deaths are not tragic accidents.

As Kim and her team begin to unravel a dark web of secrets, one of the teachers could hold the key to the truth. Yet just as she is about to break her silence, she is found dead.

With more children’s lives at risk, Kim has to consider the unthinkable – whether a fellow pupil could be responsible for the murders. Investigating the psychology of children that kill brings the detective into contact with her former adversary, Dr Alex Thorne – the sociopath who has made it her life’s work to destroy Kim.

Desperate to catch the killer, Kim finds a link between the recent murders and an initiation prank that happened at the school decades earlier. But saving these innocent lives comes at a cost – and one of Kim’s own might pay the ultimate price.

WHAT THE HELL JUST HAPPENED?!

I can’t. Sorry, just can’t. *blows nose* Please buy the book, read it for yourself, come back and talk to me or find yourself a good therapist.

What do you mean, this doesn’t constitute as a review? I’m not sure what else I can say. There are no words, people! I am writing this five minutes after finishing the book and I’m reeling! I’m not entirely sure I can string together a coherent sentence but I’ll try.

Have some tips first. Cancel all your plans. If you have kids, send them to grandparents, babysitters, wherever. If you have a partner, make sure they stay out of your way. Tie them up if need be, do whatever it takes. You will not want to be interrupted or distracted! Grab a bottle of alcohol of your choice and tissues. Aftercare and therapeutic conversation is available for those who need it.

First of all, let me just say, I love a great boarding school setting. Heathcrest Academy is specifically for the off-spring of the rich and famous. And boy, are they an arrogant bunch of kids. There were a few I would quite happily have given a bit of a spanking to wipe the smug smile off their faces. Talk about being entitled and thinking you’re better than anyone else. Sheesh.

It’s in this environment that thirteen year old Sadie Winter is found dead from an apparent suicide. Sadie seems to be somewhat of an outsider. Not particularly liked, nor particularly hated. Quite frankly, nobody really knew her. So what would cause such a young girl to jump from a roof and end her life? DI Kim Stone quickly realises things are not what they seem.

From the very first page, it’s as if someone has wrapped their hands around your neck and you’re left gasping for air. The prologue sets the tone for things to come and the pace doesn’t let up. Heathcrest has secrets and skeletons galore hiding behind their fancy wood panelled walls. With staff and influential parents desperate to avoid any type of scandal, Kim and her team have their work cut out for them jumping over various obstacles to get to the truth.

You’ve probably noticed from the book description that fans of the series can rejoice at the return of Dr Alex Thorne as Kim wants to learn more about the psychology behind children murdering other children. Are they born evil? Why did they do what they did? Do any of them show remorse or even remotely understand that what they did was wrong? Who better to ask than Alex, my favourite resident psycho?

And then … there’s this thing … I can’t talk about it. I mean, really, as it would give too much away. But also, whew, the emotions … *sniff* … I just can’t. If you’ve been following this series, be prepared for some major ugly crying.

Dying Truth is a dark, disturbing, harrowing and utterly absorbing tale. Angela Marsons ripped out my heart, shred it to pieces and stomped all over it. I love it! And her. If you’re one of those people who think a long-standing series loses its shine and lustre after a while, Angela is here to make you revise your flawed theory. I absolutely can’t wait to see what happens to Kim Stone and her team next. I don’t even care who I have to bribe (or hurt) to be first in line.

Dying Truth is out today!

Angela Marsons is the author of the International Bestselling DI Kim Stone series and her books have sold more than 2 million in 2 years.

She lives in the Black Country with her partner, their cheeky Golden Retriever and a swearing parrot.

She first discovered her love of writing at Junior School when actual lessons came second to watching other people and quietly making up her own stories about them. Her report card invariably read “Angela would do well if she minded her own business as well as she minds other people’s”.

After years of writing relationship based stories (The Forgotten Woman and Dear Mother) Angela turned to Crime, fictionally speaking of course, and developed a character that refused to go away.

She is signed to Bookouture.com for a total of 16 books in the Kim Stone series and her books have been translated into more than 27 languages.