In 1994, nine year old Effie and her twelve year old brother Ajan, endure the horrors of life in the besieged city of Sarajevo after the loss of their parents. Desperate to help preserve their city, Ajan becomes involved with a criminal gang among the makeshift defenders. When Effie is forced to flee alone, she must survive long enough to reach those outside of the city who have come to help. But the influence of those pursuing her is such that not even the soldiers of the UN might be able to save her. Any hope of a future for Effie eventually lies with only one man, Captain Nathan Lane.

It is 2017, and an attempt is made on the life of Foreign Secretary, Caroline Hardy. As the Security Services hunt for her attacker, the reality she is only a bit part player in the affair doesn’t occur to anyone. Not until her daughter, Mia goes missing and is implicated in the disappearance of a well-connected lawyer. As the focus switches to Mia, a secret that Caroline has kept hidden for a long time threatens them both, until there becomes only one place she can turn, to the man who shares her secret.

Detective Sergeant Michael Brennan of the Wigan Borough Police has no time for tales of ghosts and the afterlife, or of the dead contacting the living.

So, when he finds himself investigating the case of a recently widowed young woman, Alice Goodway, who has suddenly developed ‘the Gift’ of mediumship and has received a threatening letter, he embarks on the inquiry with no small degree of scepticism.

But just as Brennan and his burly colleague, Constable Jaggery, consider how to proceed with the case, something much more sinister takes place… a murder, in Alice’s own home.

Who would commit such a crime?

Could it be one of the seven ‘visitors’ who had been to sittings with Alice and not liked what they had heard?

Or the interfering and sanctimonious Inspector of Nuisances who strongly disapproved of the séances?

There are a lot of old wounds opened and painful memories shared with Brennan and Jaggery as they meticulously gather the information they need to solve the case. The challenge will be narrowing down the suspects, using clues from both the living and the dead… 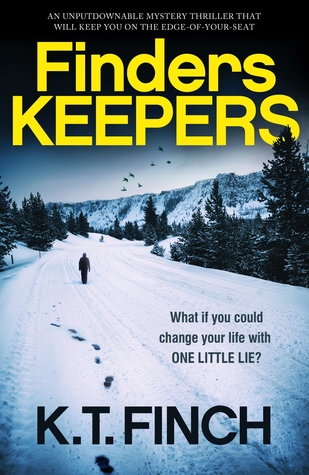 A split-second decision throws ordinary family man Noah’s life into chaos in this utterly gripping thriller that will have you hooked from the first page to the last. If you love James Patterson, Harlan Coben and Gregg Hurwitz, you’ll love Finders Keepers.

What if you could change your life with one little lie?

Noah Kendall loves his family, but hates his teaching job. Mortgage, bills and mouths to be fed: he’s stuck in a rut. And with more debts piling up each day, he knows that something has to change.

As he opens yet another red letter, he has to get out and clear his head, despite the heavy Alaskan snow outside. His legs ache as he runs deeper into the forest, until he notices something in the distance – a crashed car, sitting dead still. Inside, a girl sits slumped in the driver’s seat, eyes closed, mouth open, skin grey beneath the winter frost.

And then beside her he sees it: a bag of money. And lots of it. Enough to pay off his debt and start a whole new life. And it’s just sitting there, waiting for him to take it…

What would you do?

[previously published as The Dead Girl]

What are you reading this week? Whatever it is, I hope you enjoy your choices!
Happy reading! xx