I am absolutely delighted to welcome author Kerensa Jennings to the blog today for my stop on the tour celebrating the paperback launch of Seas of Snow! Before Kerensa tells you all about her writing plans, here is what Seas of Snow is all about. 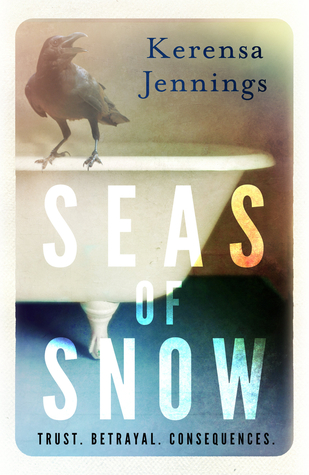 In 1950s England, six-year-old Gracie Scott lives with her Mam and next door to her best friend Billy; she has never known her Da. When her Uncle Joe moves in, his physical abuse of Gracie’s mother starts almost immediately. But when his attentions wander to Gracie, an even more sinister pattern of behavior begins.

As Gracie grows older she finds solace and liberation in books, poetry, and her enduring friendship with Billy, with whom she escapes into the poetic fantasy worlds they create. But will fantasy be enough to save Gracie? Just how far will Uncle Joe’s psychopathic behavior go?

The story weaves between these events and the visits Billy pays many years later to an old friend, confused and dying in a hospice. It is here that he is forced to revisit the events of the past.

To introduce myself, I’m someone who comes from a background where neither of my parents did A Levels or went to university. I was in fact the first person in my whole family to go to uni, so none of us could quite take it in when I made it into Oxford. Looking back now, I can hardly believe how life has unfolded since then. I am a bestselling author, a professor, a strategist and an executive coach – and previously spent more than twenty years in the media working as a TV producer. Today, I am Director, Office of HRH The Duke of York and I run the newly launched digital equivalent of The Duke of Edinburgh Award, called The Duke of York Inspiring Digital Enterprise Award.

I like creating things. Writing is a very obvious manifestation of that – I write at least something each and every day. I always have done, ever since I could hold a pencil! I’m a storyteller at heart. And a maker. Whether it’s films or food or programmes or initiatives. I love making stuff happen. A big part of that is unlocking potential in others. As a producer, I am the wind beneath the wings of the presenter. As a coach, I am in service to the client, helping them forge a better, more productive path. As a leader of initiatives, I have consistently chosen programmes that deliver impact and open up opportunity for people. So it’s a weird and wonderful combination of making and unlocking! But if you pinned me down and made me choose just one as my greatest passion – it has to be writing.

I wrote SEAS OF SNOW in all my holidays between 2009-2013 when I was the BBC’s Head of Strategic Delivery. In 2014 I polished the submission edit; then in 2015 got the book deal. In 2016 I worked on the development edit, the copywriter edit; the structural edit, the formatting edit (breathe!) then two rounds of proof reading…

I am not the sort of writer who sets themselves specific targets on word count or chapters. I write from the heart and can only really work on something as intensive and dedicated as a novel when I am in the right frame of mind. Combining novel writing with having a break from work is something I like very much. It suits me. In truth, I have always had day jobs which are far too all-consuming and time-demanding to allow me the luxury of long-form writing in a normal working week. That’s why for someone like me – who has been writing all their life – it took me such a long time to get my first novel out!

Of course I have a secret dream of being a full-time writer but so far no benefactor has swept into my life to magic away the need for a salary….

In many ways SEAS OF SNOW has achieved what I had hoped it would so it’s lovely through this book blog tour to celebrate the book’s success and to hope it might reach other readers who have not yet heard of it. Getting published is, I think, what I feel most proud of in my life so far. And this book in particular means such a lot to me. Through SEAS OF SNOW I explore themes I want to illuminate. Everything from the darkness of the human soul to different manifestations of maternal love to the capacity we have to lift ourselves sometimes against the odds. The book is also a love letter to literature in many ways – so through writing SEAS OF SNOW, I also got to share some of my passions and inspirations, turning the process of writing about something so deeply unsettling into something which also had light and life.

My publisher Unbound has told they would like to publish all three of my literary psychological thrillers which are inspired by my time working in journalism. I’ve also talked with them about a poetry anthology I would like to bring out; and there’s a transmedia children’s story-world I am working on called Storylea which is a completely different sort of thing… for children, but with rhymes. That is a very poles-apart sort of proposition and in many ways much more ambitious. I continue to tinker along with that whenever I have a moment to breathe…

I am meanwhile also working on my second psychological thriller. Where SEAS OF SNOW explores whether evil is born or made, EDGE OF RAIN asks how far can you push a person before they break… The trial I worked on was the Sara Thornton case – she had killed her husband, and was accused of murder. However, in the end, she was found guilty of manslaughter (not murder) because the evidence proved she had suffered years and years of abuse – in legal terms called ‘provocation’. This meant although she murdered him in cold blood, it was emotionally an event provoked in the moment because of all that had gone before. Fascinating stuff….

And in terms of when … watch this space! I meanwhile hope the SEAS OF SNOW paperback edition might catch the eye of people out there who haven’t had it on their radar yet.

[Lots of fabulous writing plans, Kerensa! Good luck with everything and I do hope more people discover Seas of Snow. Thank you so much for stopping by!]

Kerensa Jennings is a storyteller, strategist, writer, producer and professor.

Kerensa’s TV work took her all over the world, covering everything from geo-politics to palaeontology, and her time as Programme Editor of Breakfast with Frost coincided with the life-changing events of 9/11.

The knowledge and experience she gained in psychology by qualifying and practising as an Executive Coach has only deepened her fascination with exploring the interplay between nature and nurture and with investigating whether evil is born or made – the question at the heart of Seas of Snow. As a scholar at Oxford, her lifelong passion for poetry took flight.

Kerensa lives in West London and over the last few years has developed a career in digital enterprise.