Delighted to welcome you all to the final stop of the blog tour for Lying to You by Amanda Reynolds! My thanks to Anne Cater at Random Things Tours and the publisher for the opportunity and the review copy.

When Jess Tidy was Mark Winter’s student, she made an accusation that ultimately saw him sentenced to three years in prison. A jury found him guilty, but he always maintained his innocence. Now, Jess’s mother’s death has brought her back to the village where she grew up, and where Mark still lives with his wife. And the truth about that night ten years ago which nearly destroyed them both is finally going to come out.

Goodness gracious me, what a sticky web of lies and deceit this story is!

When Jess Tidy was a teenager, she made an accusation against her teacher, Mark Winter. Despite maintaining his innocence throughout, Mark was sent to prison. Ten years later, Jess returns home to attend the funeral of her mother. Home is the village where she grew up but also, the village where Mark still lives with his wife and daughter. Will the truth about what happened all those years ago finally be revealed?

The story alternates between Jess and Karen, Mark’s wife and the chapters are interspersed with snippets from counselling sessions Jess has attended and excerpts from a book Mark was trying to write. Suffice to say that none of these characters, while realistic and believable, are particularly likeable and I often found myself wondering how reliable their version of the truth was. Jess is obviously a very troubled young woman with a rather disturbing background and while Karen may have deserved some sympathy for her situation, for some reason I found it quite hard to muster any up.

The fall-out from whatever event occurred between Jess and Mark has an effect on everyone around them. This adds a truly thought-provoking layer to the story. How well do you really know someone? Why would a woman stand by her husband when he has been accused of something horrible? How does something like this affect the life of his own daughter? I admit that when stories like these pop up in the newspaper, these aren’t exactly the people I’ll be thinking of.

This is one of those character-driven slow burners, where the scene is set and the characters are introduced. Nevertheless, I personally thought it was utterly gripping from the start and found myself turning the pages faster as the truth was slowly being revealed. As topics go, this isn’t exactly an easy one to deal with but I feel the author tackled it brilliantly and has delivered a well-written and compelling story.

This is my first introduction to Amanda Reynolds. I’ve had her debut Close to Me on my TBR pile since it was published but still haven’t gotten around to reading it. If that one was anything like this one, I’ve been missing out and I should rectify that error soonish. Thoroughly enjoyed this psychological drama and I’m definitely keeping my eye on this author in future!

Lying to You is available in ebook format now! The paperback will be published in July.

Her second psychological suspense, Lying To You, is published in April 2018.

Amanda lives in the English countryside with her family. 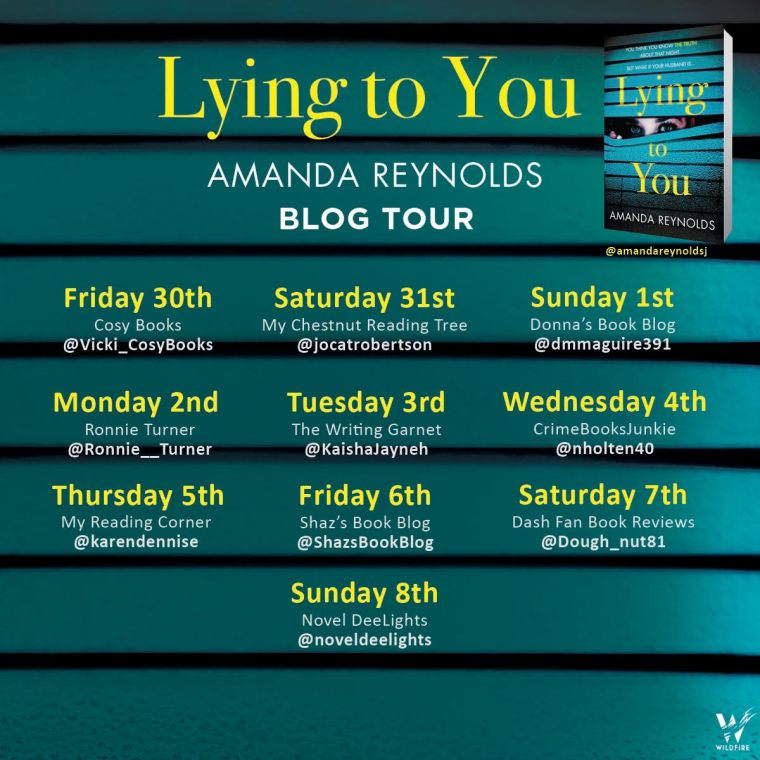