Such a pleasure to welcome you all to my stop on the blog tour for Too Close to Breathe, the debut novel by Olivia Kiernan. My thanks to Anne Cater for the opportunity and to the publisher for my review copy. 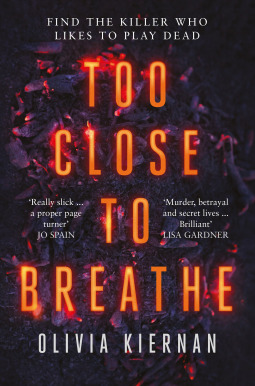 In a quiet Dublin suburb, within her pristine home, Eleanor Costello is found hanging from a rope.

Detective Chief Superintendent Frankie Sheehan would be more than happy to declare it a suicide. Four months ago, Frankie’s pursuit of a killer almost ended her life and she isn’t keen on investigating another homicide. But the autopsy reveals poorly healed bones and old stab wounds, absent from medical records. A new cut is carefully, deliberately covered in paint. Eleanor’s husband, Peter, is unreachable, missing. A search of the couple’s home reveals only two signs of personality: a much-loved book on art and a laptop with access to the Dark Web.

With the suspect pool growing, the carefully crafted profile of the victim crumbling with each new lead, and mysterious calls to Frankie’s phone implying that the killer is closer than anyone would like, all Frankie knows is that Eleanor guarded her secrets as closely in life as she does in death.

As the investigation grows more challenging, Frankie can’t help but feel that something doesn’t fit. And when another woman is found murdered, the same paint on her corpse, Frankie knows that unraveling Eleanor’s life is the only way to find the murderer before he claims another victim . . . or finishes the fate Frankie only just managed to escape.

A woman is found hanging from a beam in her bedroom. Police quickly rule out suicide and although there are very little clues, Detective Frankie Sheehan and her team zero in on one suspect. Unfortunately, the person seems to have disappeared and they have a hard time tracking him down. When a second woman is found murdered, the pressure is on. Meanwhile, Frankie is dealing with her own issues. She’s still carrying the scars from an attack that left another young woman dead. The trial for the killer is inching closer but was the right man arrested?

Set in Dublin, this debut novel by Olivia Kiernan made me feel like I just jumped off a merry-go-round. That feeling you have when your head is spinning, you’re a bit dizzy, being pulled in various directions and not knowing where to point a finger or your feet. At times, I felt like the answers should have been blatantly obvious and yet I couldn’t figure them out at all. There are plenty of twists and turns to hold your attention and best of all, they fit the story and didn’t feel contrived at all just to dazzle you.

I’m a little unsure as to how I feel about Frankie Sheehan. Yes, she’s struggling even though she won’t always admit it. She’s determined and shows incredibly strength, but she also has this tendency of getting on my nerves for some reason. She doesn’t quite strike me as someone I’d get along with. Her partner Baz, on the other hand, created the perfect balance. He’s level-headed, seeing the grey where Frankie often only sees black and white. They make quite the team, in that respect.

This cleverly plotted, tense and suspenseful story shows you just never know what goes on behind closed doors and first impressions can often be highly misleading. Never judge a book by its cover and all that. Some dark subjects come to the fore in this investigation including some of the things you find on the Dark Web. Too Close to Breathe is a well-paced first instalment in a brand-new series that kept me guessing until the end and despite my initial misgivings about Frankie, I look forward to seeing where she goes next.

Too Close to Breathe will be published on April 5th.

Olivia Kiernan grew up in the Irish countryside, a background which left her with a great appreciation of storytelling. Being almost sensible she shelved aspirations of becoming a writer and embarked on a career in science, spending six years in university studying anatomy and physiology before receiving a BSc in Chiropractic in 2003. She worked in this vein for over a decade, always writing in the evenings after work and completing an MA in Creative Writing through part-time study in 2012.

In 2015, she began writing TOO CLOSE TO BREATHE as part of National Novel Writing Month, polishing off half the first draft by the end of the month-long writing marathon. After hiding the manuscript on her hard drive for close to a year, revisiting it from time to time to add a scene or remove one, she sent it out to agents. Within a month she had signed with a literary agent and in 2017 a dream was realised when TOO CLOSE TO BREATHE sold. 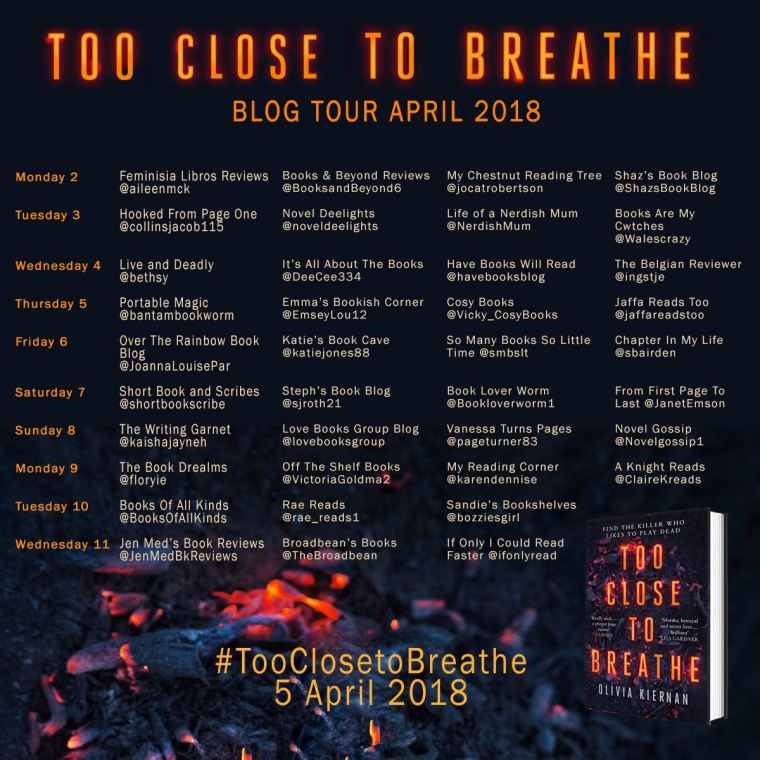