It’s a pleasure to welcome you all to my stop on the blog blitz for The Scent of Guilt by Tony J. Forder. My thanks to Sarah Hardy and Bloodhound Books for the opportunity and my review copy. 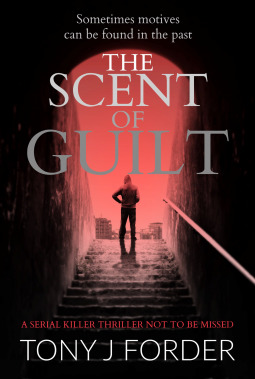 Twelve years after he left Peterborough under a cloud, DI Bliss returns to the city and the major crimes team. Having spent years policing organised crime, Bliss is plunged straight into the heart of a serial murder investigation.

Meanwhile, Penny Chandler has been promoted to DS and has been working in London on the Met’s sexual crimes team. But when two rapes are reported on her old patch in Peterborough, Chandler volunteers to interview the victims.

Chandler joins the hunt for the attacker and soon notices a possible link between the rapes and Bliss’s murder investigation. Could the same man be responsible?

Just as both cases seem to stall, a call comes in from an ex-policeman who knows of unsolved cases in the USA with a similar MO. Bliss finds himself travelling to California to hunt for a killer whose reach may have stretched further than anyone could possibly imagine.

But in order to catch the murderer, Bliss must discover the killer’s motive. A motive which should have remained buried in the past.

Twelve years after leaving Peterborough and the Major Crimes Team, DI Bliss is back in familiar surroundings. On his first day, he’s thrown head first into what looks to be a serial killer investigation when the body of an elderly woman is found. Meanwhile, DI Bliss’s former colleague DS Chandler has been working on rape investigations. When her most recent case leads her back to Peterborough, she thinks there may be a connection between the rapes and the murders. Their search for the killer will lead them to America and back again.

As far as this murder investigation goes, The Scent of Guilt reads perfectly well as a stand-alone but I do feel you’d miss out on quite a bit of background regarding, for instance, DI Bliss’s health, which is explained in the first book in this series Bad To The Bone. I’m glad I managed to squeeze that one in before I read this one, even though I must admit the twelve year gap threw me off a little bit in the beginning and I thought I’d missed a book somewhere. Things have obviously changed in the last twelve years and some of the people DI Bliss used to work with have been replaced. Not all of them are happy to see him return and it’s not all plain sailing.

The chase for the serial killer is incredibly thrilling. The detectives quite quickly zero in on a potential suspect but are they right in doing so? Is there a rapist and a killer? Or is there only one person responsible for both vile acts? What is the motivation behind these attacks and why now? All these questions must be answered, preferably before there’s another victim. But when DI Bliss jets off to America, is he putting his own investigation into jeopardy? I didn’t have a clue but I really enjoyed trying to figure it out.

I love that part of this book is set in America. Cold cases are always fascinating to me and having the chance to work on this puzzle alongside Bliss, trying to find some kind of connection to what’s happening back in the UK, really held my attention throughout. The Scent of Guilt is a well plotted and suspenseful crime thriller. The pace starts off a little slow but ramps up as you go along and ultimately ends with a most satisfying conclusion.  Another great addition to this series and I hope Bliss and Chandler will return soon!

The Scent of Guilt is available for purchase.

Tony J Forder is the author of the critically acclaimed crime thriller Bad to the Bone, the first in a series featuring DI Jimmy Bliss and DC Penny Chandler. The sequel, The Scent of Guilt, is available from 17 February 2018. A third book in the series is currently in progress.

Tony’s dark, psychological crime thriller, Degrees of Darkness, featuring ex-detective Frank Rogers, was also published by Bloodhound Books. This was intended to be a stand-alone novel, but Tony is now considering the possibility of a follow-up.

One book that will definitely see a sequel is Scream Blue Murder. This was published in November 2017, and received praise from many, including fellow authors Mason Cross and Matt Hilton.

Some years ago, Tony won a short story competition judged by an editor from Pan Books. The story, Gino’s Bar and Grille, went on to be published in Dark Voices 2, part of the celebrated Pan Book of Horror series. Three further short story sales followed: Book End, published in Dark Voices 4, Character Role, in FEAR magazine, and finally A Grim Story, which featured in A Rattler’s Tale. It was the start of Tony’s publishing journey.

Make sure you visit these other awesome bloggers on the blitz.

One thought on “The Scent of Guilt by Tony J. Forder @TonyJForder @Bloodhoundbook #blogblitz #TheScentofGuilt”