Welcome to my stop on the blog tour for Dangerous Score by Michael Bearcroft. Today, I have an extract and a giveaway for you but first, here’s what the book is all about.

Football hero Jason Clooney is riding high….until a date with a beautiful woman lands him in trouble with the media, and into battle with the criminal underworld.

Now against a backdrop of an uncertain professional future, Jason has to confront disturbing revelations surrounding his new girlfriend’s family. From football action on the pitch to behind the scenes plotting. To battles with a criminal gang and constant media attention, all adding to the toughest challenges he has ever faced in life, love, as a player and as a man.

For the big day at work he packed an extra shirt and toiletries. ‘Got to look the part, for the punters,’ he told himself. His dad phoned to check he was alright. Jason was able to tell him that his visit to the police station had gone quite well, though it had puzzled him why the detective had seemed more interested in Martin Thresham the father, rather than Jess the missing daughter. His dad said he would see if he could find out more about the Thresham family. He had friends who would be able to help. Jason felt reassured that he would come up with something. He always seemed to be able to dig up information, on anyone or anything.

Motor Giant was covered in bunting. The new commercial vehicles were positioned on ramps around the building. Andy summoned Jason to his office. He wanted to know how things stood. Clooney brought him up to speed and was excused without comment. Andy seemed to accept that Jason had done all he could to settle the dust.

It was late morning when Jason met up with James Boardman, the television presenter, and host of this evening’s presentation. Clooney took an instant dislike to him, fake tan, built-up shoes and a wig. There seemed nothing real about him.

Most of those invited turned up at the event and everything seemed to be going well, until Jason was accosted by a hefty, florid brute of a man, who looked and smelt like he’d been for a swim in a beer barrel. Here was trouble. He jabbed Jason in the chest as he staggered up to him.

‘I’m Martin Thresham. What the hell have y’ done with my little girl you bastard? Or was it all a lie because y’ can’t get a woman?’

Everything about him made it plain that he didn’t like Jason. The insults continued, but he stood his ground, partly because of his surprise at the venom, and partly out of respect for the man’s concerns about Jess. But when Thresham threw a left-handed punch which brushed Clooney’s face, that was it. All the anger, embarrassment and frustration Jason had been feeling since Saturday night’s fiasco surfaced. He had no intentions of being a punch bag for anyone.

He hit Thresham with a straight right to the nose, which broke on contact, while with his left he delivered a welldelivered blow to the solar plexus. Thresham went down. Jason might have gone on to kill him, if Andy and two other onlookers had not dragged him off. Andy struggled to control his anger. He screamed at Jason, ‘Go home now. You’re suspended until further notice.’

With the eyes of dozens of startled onlookers on Jason straightened himself, walked over to his desk, picked up his keys and turned to leave. Detective Sergeant Burns was blocking his way. He gave Jason a hard stare.

‘Get across the road to the Holiday Inn. Go now and wait for me in the bar, if you know what’s good for you.’

Clooney duly obliged, leaving Burns accompanying Thresham, Andy and members of staff to a private room where the injured man could receive treatment.

Yet again Jason took off at speed in the Saab he had been driving all weekend. The hotel was literally across the road and having parked the car he walked for a while to think things through and compose himself. The sports bar of the hotel was showing a football match on the television. He took no notice, ordered a lager, and sat in a corner to wait for Burns. He realised he had really done it this time and couldn’t help but wonder what would happen next.

Half an hour later Burns arrived, bought himself a drink and sat next to the troubled man. After taking a swift slurp of his beer he turned to Jason.

‘You really are a prat you know. Thresham is serious bad news and you have just made him your enemy.’ Burns shook his head, and took a second mouthful of his beer.

‘Fortunately for you, Thresham saw sense when I reminded him that he threw the first punch. His pride is hurt as much as his nose, so he would rather forget about it than read about it in the papers. If he pressed charges there would be court appearances and that’s something he would certainly want to avoid. He must have sleepless nights wondering when, not if, he will be hauled in front of a judge again.’

Clooney was sharp enough to realise he owed the man a favour and he tried to thank him, but Burns was having none of it.

‘You’re lucky it was me there rather than anyone else, or you would be under arrest for GBH.’ He shook his head again and downed his beer in one go.

‘We’ve re-opened up the case on Miss Thresham. We don’t yet have any more information other than your apparent meeting with her. We’ve checked with our contacts in Australia who confirmed you were over there when she was reported missing, so you are in the clear there. But tonight, you stupid sod, you have made life even more difficult for yourself, so watch your back and be very careful. Thresham won’t forgive you and he will want revenge. Anyway enough of this. Now tell me how you felt scoring that goal.’

It turned out that Burns was a keen football fan and had been to the game, so it was the usual football talk until he stood up to leave.

‘Blister’s as fond of you as I am of him and I know it would upset him if anything happened to you. So for his sake, if not your own, keep your eyes open and your head down and maybe, just maybe, this might blow over.’

With that he strode purposefully out of the building.

Jason slumped back on the bar stool. He felt ravenous so ordered burger and chips, but sensibly had black coffee rather than another lager. He thought Burns seemed a reasonable kind of bloke. He would speak to Blister and try and find out a bit more about him.

Dangerous Score is available for purchase. 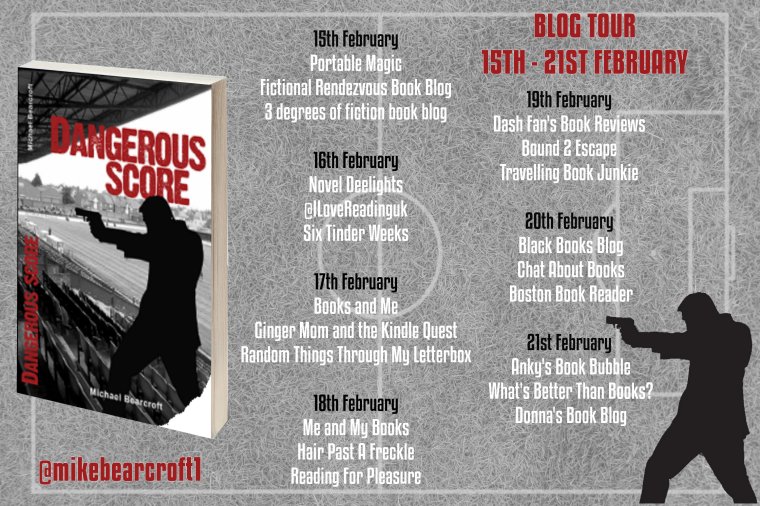