It’s a happy publication day to Rachel Abbott and the seventh book in the DCI Tom Douglas series, Come A Little Closer. My thanks to Maura for my review copy, which I received via Netgalley. 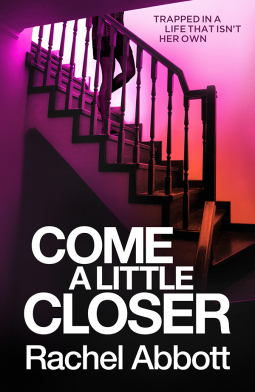 Snow is falling softly as a young woman takes her last breath.

Fifteen miles away, two women sit silently in a dark kitchen. They don’t speak, because there is nothing left to be said.

Another woman boards a plane to escape the man who is trying to steal her life. But she will have to return, sooner or later.

These strangers have one thing in common. They each made one bad choice – and now they have no choices left. Soon they won’t be strangers, they’ll be family…

When DCI Tom Douglas is called to the cold, lonely scene of a suspicious death, he is baffled. Who is she? Where did she come from? How did she get there?

How many more must die? Who is controlling them, and how can they be stopped?

When the body of a young woman is found in the forest, DCI Tom Douglas is called to the scene. Heavy snowfall means there are few clues left to be found. How did this woman end up in the middle of nowhere? Where did she come from? And most importantly, who is she? Because as long as that remains unknown, the investigation goes pretty much nowhere. On the other side of the world, another woman goes on the holiday of a lifetime, in an attempt to escape an abusive relationship. Meanwhile, Tom’s past catches up with him but will this cause problems between him and Louisa?

The DCI Tom Douglas series is one of my favourites and if you’re not reading these, you’re missing out on some seriously good books. I’ve come to rely on Rachel Abbott to deliver highly original premises and Come A Little Closer is no different. The description promises something intriguing and I wasn’t at all disappointed.. This is one well-thought out plot and it’s also intensely creepy.

Although the who seemed fairly obvious to me, I had a hard time figuring out the why. This story tackles a topic which is sadly highly realistic and believable. Those moments where the vulnerable suddenly turn into preys, find themselves cut off from the world with their thoughts so incredibly manipulated that they feel there is no escape. It’s very reminiscent of grooming and trafficking.

I couldn’t predict the outcome at all and the parts of the story completely threw me, which I love. This is one dark, disturbing and harrowing tale. Full of tension and suspense, it had me hooked from start to finish and seeing all the threads come together was a true delight. Come A Little Closer is another brilliant addition to this series, which keeps going from strength to strength.

Tom and Becky make such a fabulous team. It seems it has been ages since we last hung out with them and it’s such a thrill to see them return. I’ve missed them fiercely and I can’t wait to spend more time with them in future. I have no doubt it’ll be worth the wait.

I was born and brought up in the north of England, and worked for many years as the managing director of an interactive media company. I wrote every day – everything from creative proposals to user manuals – but most exciting of all was writing interactive dramas – including for the Cluedo (Clue in the US) interactive games. I was fortunate enough to sell my company in 2000 and we moved to Italy where we bought and restored an old country house.

I have published six full length novels and one novella, and my seventh Come a Little Closer is due for release in 2018. I now live on the beautiful island of Alderney in the Channel Islands, where I write full time.