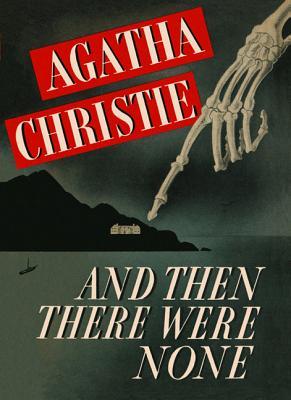 Author : Agatha Christie
Title : And Then There Were None
Pages : 256
Publisher : Harper Collins
Publication date : September 12, 2013 (first published in 1939)

Ten strangers, apparently with little in common, are lured to an island mansion off the coast of Devon by the mysterious U.N.Owen. Over dinner, a record begins to play, and the voice of an unseen host accuses each person of hiding a guilty secret. That evening, former reckless driver Tony Marston is found murdered by a deadly dose of cyanide.

The tension escalates as the survivors realise the killer is not only among them but is preparing to strike again and again.

I’m continuing on my mission to read books by Agatha Christie and despite all the wonderful suggestions in the comments on my post for Murder on the Orient Express, I disregarded them all (sorry, not sorry) and settled for And Then There Were None because I just bloody love that cover. Sometimes a decision is as easy as that.

Now, I was familiar with the premise of this story. Ten people, who seemingly have nothing in common, are invited to a mansion on an island by a mysterious person calling themselves U.N. Owen. On their first evening at the mansion, there’s a death. And then there were nine. I’m sure you get the picture. But that’s all I knew.

Could Agatha Christie weave a story or what?! This one is so unique and once again proves her incredible observational skills where people are concerned. All these characters are realistic and believable, albeit it in our eyes now maybe a tad old-fashioned. She makes it so easy to imagine what it feels like to be stuck in an isolated place with people you don’t know, not knowing who to trust and with no means of escape.

I couldn’t for the life of me figure out who was responsible and the conclusion left me spinning. I absolutely loved the ending, where it kind of felt to me as if the author was just rubbing my nose into the various clues I missed and which instantly made me want to read the whole book again. Well played, Agatha.

This is only the second Agatha Christie novel I’ve read but it was a roaring success yet again and I’m more determined than ever to read more books by her in the next few months.

And Then There Were None was first published in 1939 and is available in a multitude of formats and covers.

26 comments for “And Then There Were None by Agatha Christie”