Thrilled to bits to host a stop a stop on the blog tour for the belter that is Black Heart by Anna-Lou Weatherley today! My thanks to Kim Nash at Bookouture for the opportunity to join and my review copy, which I received via Netgalley. 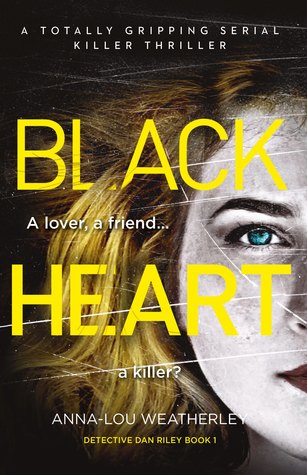 When the body of a wealthy banker is found with his wrists slashed in a London hotel room, it appears at first to be a tragic suicide. But Detective Dan Riley suspects there is more to this case than meets the eye and the pathology reports confirms his worst fears – the victim was poisoned and suddenly Dan is dealing with a murder enquiry.

Still grieving the devastating loss of his girlfriend and unborn child in a car accident two years ago, Dan throws everything he has into the investigation. Then he makes a disturbing discovery, uncovering links between the victim and a woman calling herself Goldilocks on an online dating site. Is she seeking revenge or something more?

Yet just as Dan begins to piece together the clues of this complex case, the body of a woman is found in her bed with identical wounds. Dan is on the trail of a twisted serial killer – and the stakes just got higher.

Bloody hell! Give me a minute to pick my jaw up off the floor and figure out how to write coherent sentences.

When the body of a wealthy man is found in a hotel bathtub with his wrists slashed, it seems this case is nothing more than a tragic suicide. But Detective Dan Riley isn’t convinced and it soon becomes apparent the man was poisoned. Who would want to hurt this man and why?

The who is fairly obvious from the start. The why leads to a an utterly heartbreaking story and despite the horrible acts this serial killer is committing, you can’t help but feel sorry for them. I found these parts to be brilliantly written and an interesting character study. This serial killer is on a mission, which results in a race against the clock to make sure they won’t succeed in their plan.

And then there’s our main character, Dan. He’s so different from the average detective I tend to read about. A copper with a heart of gold, who’s able to sympathise on various levels because of his own personal loss. He knows what it’s like to receive that particular bad news, the shock of it all, the grief and how hard it is to move on. He’s one of those characters you can’t help but gravitate towards and you’re rooting for him in every way. In my head, I’ve even already fixed him up with another character. That’s how much I want him to be happy! 😄

This is an absolutely amazing start to the Dan Riley series. Black Heart has everything. The original premise had me hooked from start to finish and this sordid tale is incredibly gripping, compelling and addictive. Quite frankly, I’m a little unsure as to how Anna-Lou Weatherley can top this (no pressure!) but I’ll be using my elbows to make sure I’m first in line when book two in the series hits the shelves.

Anna-Lou began her career as a dancer but a moped accident in Ibiza put paid to those aspirations and so she went back to her first and one true love – writing! She re-trained as a journalist, specialising mainly in women’s interest and celebrity, becoming the Editor of J-17 and Smash Hits as well as writing for a host of women’s magazines.

Anna-Lou has written three Adult Fiction titles – Vengeful Wives and Wicked Wives, both published by Avon in the UK and Bookouture in the US and Canada and Pleasure Island published by Bookouture. 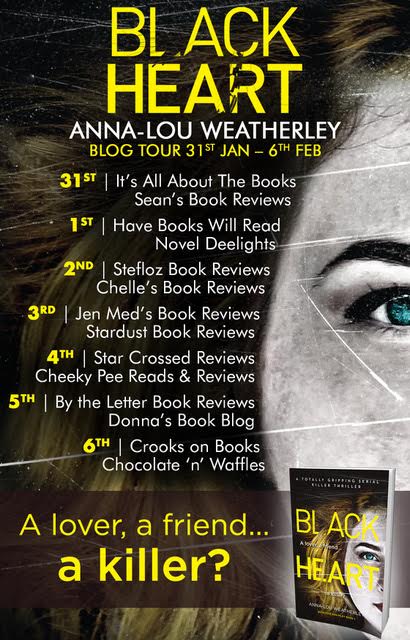