Welcome to my stop on the blog tour for Veronica’s Bird by Veronica Bird and Richard Newman. I have an extract to share with you all but first, here is what this true story is all about.

Veronica Bird was one of nine children living in a tiny house in Barnsley with a brutal coal miner for a father. Life was a despairing time in the 1950s, as Veronica sought desperately to keep away from his cruelty. Astonishingly, to her and her mother, she won a scholarship to Ackworth Boarding School where she began to shine above her class-mates.

A champion in all sports, Veronica at last found some happiness until her brother-in-law came into her life. It was as if she had stepped from the frying pan into the re: he took over control of her life removing her from the school she adored, two terms before she was due to take her GCEs, so he could put her to work as a cheap option on his market stall. Abused for many years by these two men, Veronica eventually ran away and applied to the Prison Service, knowing it was the only safe place she could trust.

This is the astonishing, and true story of Veronica Bird who rose to become a Governor of Armley prison. Given a ‘basket case’ in another prison, contrary to all expectations, she turned it around within a year, to become an example for others to match. During her life inside, her ‘bird’, she met many Home Secretaries, was honoured by the Queen and was asked to help improve conditions in Russian Prisons.

A deeply poignant story of eventual triumph against a staggeringly high series of setbacks, her story is laced with humour and compassion for those inside.

Prison riots and escapes are top of the agenda incidents in the prison service: they have to be, because of their unpredictability. A riot, fully flared up is like a raging fire, uncontrollable until highly trained prison officers are brought to bear. In the short time before their arrival, prisoners will often smash the entire contents of their own cells, thus depriving themselves of their own possessions and making it difficult for them, to settle down again after the madness of the moment. They can be extraordinarily unsafe places to be, just as an elephant in musth will destroy anything in its path.

Escapes are of huge concern because the staff, under Veronica’s control, were charged to keep the public safe from what can be very dangerous individuals. If an inmate escapes it is usually because of a singular lapse in the normally tight security which surrounds the prison population twenty-four hours a day.  Prisoners have all the time in the world to plan.  They have the opportunity and will seek out every weakness in the system even before the staff become aware.

As an example, four prisoners escaped from Armley jail, a large prison in Leeds during Veronica’s watch. She was in charge, as the senior Governor was away on holiday, and was woken at three in the morning to be given the news. She threw some spare clothes into the back of her car and roared off towards Armley from Wilmslow where she lived. Arriving, she was told by a policeman she ‘…can’t park there, four prison-’   ‘I know, I’m the Governor.’ ‘Oh yes, Madam’, the Copper replied, seeing a lady in front of him dressed in a nightdress and wearing pink slippers. He received her car keys in his lap with some force. Now was not the time for niceties, she felt, as she quickly set up a Command Post to take charge of the necessary actions according to a plan already drawn up for such emergencies. This involves the police as well as the Prison staff and the media to advise the public accordingly.

Of the four men, three were on the prison roof having dug out the mortar in a new concrete block building with a knife, and were still there. The fourth was a different problem entirely, for he was dangerous, and it was not for the public to do their duty to try and stop such a bad man. Hence the need of the police for the search outside.

Gradually the news was passed up to the Command Post that this man had climbed out of a window and shinned down knotted sheets to a builder’s yard and was away before anyone knew of it. The search operation first learned of it later being told that a milkman had seen a man walking alone up the side of the M1. The milkman stopped and gave the  walker a pint of milk even though he had no money to pay for it, before driving on to make his deliveries.

In the middle of directing operations from her office, Veronica heard on the local radio she was, apparently, up in a helicopter, hovering over the prison, over-seeing the action. It is not always wise to believe everything one is told.

The prisoner had disappeared into the morning mist with the milkman never stopping to think it might have been a bit strange to have encountered a man on the motorway at that time of the morning. Eventually, the three men were returned to their cells with loss of remission, the fourth took longer to find but, as always, he ended back inside Armley. The enquiry exonerated Veronica on the basis the building works had created the opportunities for escape. The prisoners had been very quick to see a route out.  The enquiry did, however, issue recommendations for lockdowns whenever a knife, say, or a tool disappeared. The following search would continue until the missing item was found.

Riots put the staff most at risk; escapes put the public at risk. Veronica always recognised this and strove to ensure that prisoners grievances did not grow until they became unmanageable. There was always something she could do to keep the prison population calm: ‘…it’s not rocket science, just common sense.’

Veronica’s Bird will be published on January 23rd.

After thirty-five years working for the Prison Service, Veronica Bird is now retired and living in Harrogate, North Yorkshire. She is still an active proponent of the justice system and continues to lecture across the country and is a supporter of Butler Trust, which acknowledges excellence within the prison system.

A qualified architect and Swiss-trained hotelier, Richard Newman enjoyed a forty-year career designing and managing hotels worldwide before retiring in 2001. Since then he has gone on to publish a number of novels: The Crown of Martyrdom, The Horse that Screamed, The Potato Eaters, The Green Hill, Brief Encounters and most recently The Sunday Times bestseller, A Nun’s Story. He is currently working on a new novel about retirement and an autobiography of his time in the Middle East. He lives happily with his wife in Wetherby, West Yorkshire where he enjoys being close to his family. 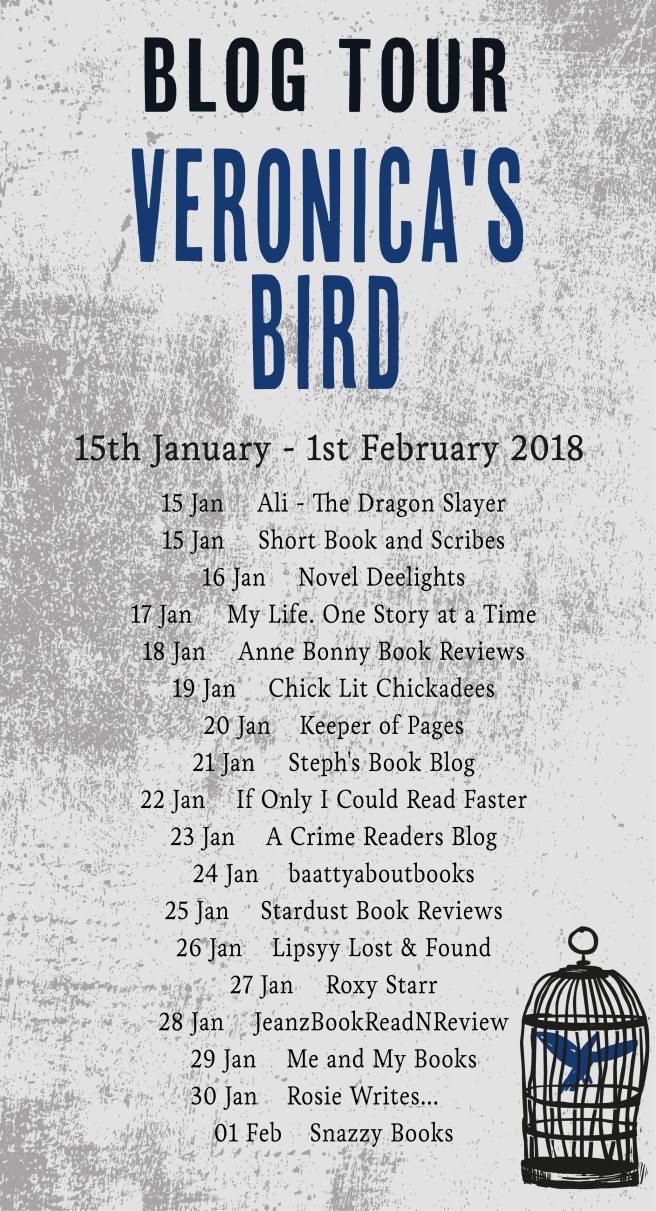