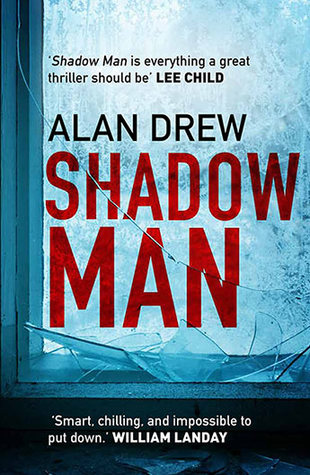 Detective Ben Wade has returned to his California hometown of Rancho Santa Elena for a quieter life. Suddenly the town, with its peaceful streets and excellent public schools, finds itself at the mercy of a serial killer who slips through windows and screen doors, shattering illusions of safety.

As Ben and forensic specialist Natasha Betencourt struggle to stay one step ahead of the killer, Ben’s own world is rocked again by a teen’s suicide. Ben must decide how far he is willing to go, and how much he will risk, to rescue the town from a long-buried secret, as well as from a psychotic murderer.

I’d never heard of Alan Drew before but when I read the description of the book and saw mention of a serial killer slipping through windows and screen doors, I jumped at the opportunity to read and review Shadow Man. Imagine my surprise and absolute delight when I discovered that this book is about so much more than just a creepy psychopath. In fact, that bit could very much be considered almost irrelevant.

Set in the 80’s, Ben Wade moved his family back to his hometown in an attempt to save his marriage. It’s obvious quite early on that this didn’t quite work out as Ben is now divorced. Life seems rather dull after a career in Los Angeles as nothing really ever happens in Rancho Santa Elena. Until there’s a murder and it seems a serial killer has descended upon the town.

This is a very different police procedural to the ones I normally read. It’s incredibly character driven and beautifully written. The small town setting in Southern California works like a charm and oozes atmosphere and while the investigation into the serial killer is interesting, it’s not the be all and end all of this story. Because Detective Ben Wade has other things to deal with when a teenaged boy is thought to have committed suicide and he will be forced to face his own past and reveal a deep rooted secret.

If you’re going into this story expecting a fast-paced read and an action-packed chase for a serial killer, you will most likely end up extremely disappointed. It doesn’t provide the high level of suspense you’d expect from the description. I’m not even sure I’d call it a thriller, even though it seems to be marketed as one. And while I did find it chilling at times, those moments had nothing to do with the killer but more with Ben’s past and the seemingly blind town residents.

Like I said at the start though, even though Shadow Man wasn’t exactly what I expected, I did thoroughly enjoy it. Alan Drew has a wonderful writing style and has created well-developed, complicated and realistic characters that drew me in and held my attention until the end. I would definitely recommend this one if you like character-driven novels.

My thanks to the publisher for the review copy!

Shadow Man is available for purchase!