It’s my pleasure to welcome you all to my stop on the blog blitz for The Liverpool Girls by Pam Howes. This is the final book in The Mersey Trilogy and I have an extract to share with you today to whet your appetite. Many thanks to Kim Nash at Bookouture! 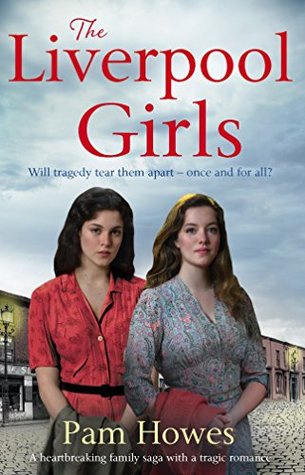 Will tragedy tear them apart – once and for all?
It’s 1966 and in Liverpool two sisters are about to have their lives turned upside down…

Sisters Carol and Jackie haven’t had the easiest of childhoods, but as they grow up and begin their own lives both hope for happier times ahead. Stylish Carol works in Lewis’s department store, while Jackie dreams of drama school, and a career on the stage.

But the sisters are heartbroken when they discover they have been dating the same man, and an unexpected pregnancy causes a rift between them. Parents Dora and Joe must overcome their past hurts and help their daughters, despite the meddling of Joe’s second wife Ivy.

As the sisters’ troubles spiral and difficult decisions must be made, can the family pull together – or will Jackie and Carol’s sisterly bond be destroyed forever?

Jacqueline Evans pulled the pillow around her head as her mam Dora bellowed up the stairs for the third time in as many minutes.

‘Jackie, come on, are you getting up today, or what? I’ve a lot to do. If you don’t want to come shopping in town with me, just say so. You can go and take some flowers to Granny’s grave for me, save me having to go over later.’

Jackie groaned and threw back the covers. She sat up slowly and dangled her feet over the bedside rug. Saturday morning, and she’d been hoping for a lie-in. She stared around the spacious bedroom that she’d once shared with her older sister Carol, who now lived in Allerton with their dad and his second wife Ivy. They’d seen little of Carol since she’d started working full-time at Lewis’s department store, and begun dating a new boyfriend. Carol had told Mam it was quicker to get to work as Dad’s house was closer to the city centre than here. Jackie secretly thought that was just an excuse to move out as Carol thought she’d get more freedom to do as she pleased at Dad’s. Mam hadn’t been too happy with her decision. They’d had a few arguments about it. But at eighteen, Carol was old enough to make her own choices and had told their mam so. Carol had lived with Dad for a time when their mam had suffered depression and then again when – due to a wrongful accusation against Mam of child neglect – the welfare department had decided Carol should be returned to Dad’s care. She’d eventually come back to live with their mam and Jackie, but had never been as close to Mam as Jackie was.

Jackie knelt up on her bed and pulled back the floral curtains. They did little to keep out the cold this morning. It was freezing. She chipped at the ice on the window with her fingernail. She’d bet anything that Carol didn’t have ice on her bedroom window; she’d told them they had central heating. For a brief moment she wished that she too had gone to live with Dad and Ivy in their new house, then immediately felt guilty. Mam did her best. Her job as an early-morning cleaner at Fazakerley hospital helped pay the rent and she also ran a small dressmaking business from the spare bedroom, having been a seamstress all her working life. They managed, just about. Mam was fiercely independent and refused to accept money for Jackie’s keep from Dad, even though he constantly offered it.

In a few months it would be Jackie’s turn to look for a job. She finished school in July after O levels, but didn’t have much of an idea of what she wanted to do. Well she did, but Mam didn’t have the money to support her dreams of going to drama school.

Slaving away in a factory was not an option Jackie fancied, she was adamant about that. Although Mam had mentioned Hartley’s paid good money; perhaps she could save a bit for the future and study drama at night school. Jackie yearned for more from life than factory work though. She loved to sing and dance, and as a child she’d attended dancing classes and even taken part in a few shows and Christmas pantos at the Empire Theatre. But the nearest she got to a stage these days was at school. She always involved herself with the annual summer and Christmas shows and enjoyed teaching dance routines to her fellow pupils.

Carol worked in Lewis’s wages office and had told Jackie she might be able to get a job in the store when she was ready, which would also be a great temporary measure. Carol got a discount on her clothes and makeup and always looked dead fab and trendy. Jackie envied her older sister, who was a Mod and had recently had her light brown hair cut short like the model Twiggy. She wore spiky lashes and pale lippy and had told Jackie that her new boyfriend had a scooter. The pair belonged to a crowd that went to all the clubs in town. Jackie hadn’t met the boyfriend, Alex, yet, but she aspired to be a Mod too. Maybe he’d have a mate with a scooter who Carol could introduce her to. She wouldn’t want her hair cutting short though; she preferred to keep it long.

Her friends at school often told her she had a look of Marianne Faithfull with her blonde hair and dark blue eyes. It was her clothes that left a lot to be desired, Jackie thought. Apart from her school uniform she’d hardly anything else to wear. She really needed something new before she was ready to meet a nice lad and start dating. She’d grown a few inches in the last twelve months and the clothes Mam had made her last year were far too short now, even shorter than would be acceptable as mini skirts and dresses. Mam kept saying she’d get cracking and make her some new clothes, but finding the time to do it on top of her cleaning and sewing work was almost impossible, and Jackie didn’t like to mither too much.

Maybe Carol could ask if there was a Saturday job for her at Lewis’s to be going on with, perhaps on one of the makeup counters. It would tide her over and give her a bit of spending money to treat herself. She’d try and see Carol soon. She could sneak a day off school and go into the city; meet her in the Kardomah for a bit of dinner. If they lived in the same house Carol would probably lend her something nice to wear. She may just take up her dad’s invite to stay over at the new place occasionally at the weekend.

‘Jackie!’ Mam’s repeated yell broke her thoughts. ‘I won’t tell you again. If you’re coming with me you need to be ready in ten minutes tops. I’m waiting to go.’

Jackie ran down the stairs and stood shivering in the hall in her nighty. ‘Mam, you get off. I need breakfast first, and then I’ve got some homework to do. I’ll get the bus up to Knowsley this afternoon and take some flowers to Granny’s grave. Shall I put some on Esther’s grave as well?’

Esther was the late wife of her mam’s old boss, who’d been like a second grandma to Jackie when she was little.

‘That would be lovely, chuck. Tidy them both up for me as well, if you will. But go before it gets dark. You don’t want to be hanging around graveyards in the dark and by the time you get back from Knowsley it will be. We’ll be able to get some daffodils to brighten the graves up in a week or two. Esther loved her daffs. So did my mam. I do miss them both.’

Jackie nodded. ‘So do I. Poor old Gran. It was a shame she went so quickly in the end.’

‘I know, love, but her memory loss was bad. It must have been so frightening for her at times and she was in shocking pain with her joints. I don’t think her body could take much more. Her passing was for the best. She’s at peace now.’

Dora’s mother had spent her final years in a nursing home, after being transferred from a residential home where she’d lived previously. A bump to the head a few years ago had set her on the road to losing her memory. Coupled with crippling arthritis in her knees and hips, it had meant she’d been wheelchair-bound for the last few months of her life. She’d been laid to rest in St Mary’s churchyard in Knowsley village, alongside her late husband and baby granddaughter Joanna, Carol’s twin, who’d died shortly after birth.

Dora handed Jackie a ten-shilling note. ‘That should be enough for the flowers and your bus fare. I’ll see you later, love.’

‘Okay, don’t forget I’m going over to Patsy’s tonight.’ Jackie kissed her mam on the cheek and closed the front door behind her.

The Liverpool Girls is available for purchase now!

Pam Howes was born in Cheshire. She is a retired Interior Designer who began writing seriously in the mid nineties.

Pam is mum to three adult daughters, grandma to seven assorted grandchildren, and roadie to one musician partner. She still lives in Cheshire and is currently involved in raising awareness of her home-town’s musical heritage with campaigns to have Blue Plaques erected on the walls of local clubs, The Manor Lounge and The Sinking Ship, where the likes of The Walker Brother’s, The Who and Jimi Hendrix played; now closed, but still firmly in the hearts of Stockport’s recycled teenagers.