Happy publication day to Helen Phifer for Dying Breath, the second book in the Detective Lucy Harwin series! I have an extract to share with you to whet your appetite on this blog blast. Many thanks to Noelle at Bookouture! 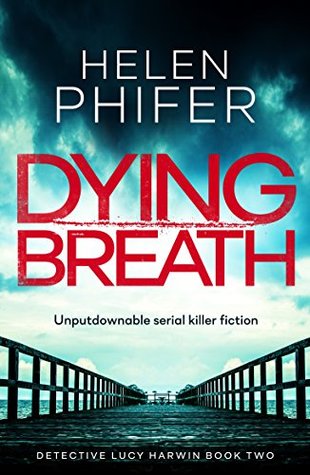 Just a few months after a terrifying case that nearly took her life, Detective Lucy Harwin is back with her squad in the coastal town of Brooklyn Bay – and this time, she’s faced with a case more horrifying than anything she’s encountered.

Along with her partner, Detective Mattie Jackson, Lucy is investigating what appears to be a vicious but isolated murder; a woman found bludgeoned to death on a lonely patch of wasteland.

But when a second victim is discovered strangled in an alleyway, then a young family shot in their own home, Lucy and the team must face the unthinkable reality – a killer is walking the streets of their town.

While Lucy and the team try to find the link between these seemingly unconnected murders, they uncover a disturbing truth – these murders are replicating those carried out by infamous serial killers.

Lucy must get to the killer before he strikes again. But he’s got his sights on her, and is getting ever closer… Can she save herself, before she becomes the final piece in his twisted game?

He watched and waited, playing his favourite guessing game. Who was going to die tonight? He was sitting in the car with the engine running to keep the windows from steaming up. Autumn was his favourite time of year; he liked the dark nights and the frosty mornings, although today had been dismal.

He’d been parked up the street from The Ball and Chain for an hour already. The dirty grey rainclouds that had filled the sky when he arrived had now turned black. The whole time his knees had been twitching; he kept clenching and unclenching his knuckles. His tongue kept snaking from his mouth and licking his lips. The excitement and anticipation were almost too much to bear. There were no stars or moon to illuminate the streets tonight and he liked it that way – the darker the better. It matched his soul.

The Ball and Chain was your typical working-class pub, full of contractors and locals who wanted cheap beer, cheap food and even cheaper women. Not that he knew the clientele particularly well; he’d only been inside once, a few weeks ago. There had been some old guys and a woman with bleached-blonde hair sitting by herself in the corner, nursing a large glass of wine.

Tonight the same woman had been out three times for a cigarette, first on her own and then with a couple of older men. At a guess she was in her early fifties, and was wearing jeans which looked as if they’d been spray-painted on. The top she was in wouldn’t have looked any better on a twenty-year-old because it was far too short to be flattering. He could see the pasty rolls of her stomach falling over the waistband of her jeans. Her two-inch, black roots were in dire need of a retouch, which made her the perfect victim: she was a very good match. Each time she came outside she stumbled that little bit more. He was wondering if she’d be there until closing time and hoped to God they didn’t have a lock-in.

Finally his patience was rewarded when there was a commotion, and loud shouting came from the direction of the pub. He looked up from the book he was reading to see the barmaid pushing the woman out. She wasn’t going without a fight and she swung for the younger woman, who expertly dodged the fist that came her way. The woman stumbled backwards and the pub door was slammed shut. She stepped forward and began to pound on the door with her fists. Nobody answered and he smiled as the rain, which had been threatening to fall all night, began to hammer against the car bonnet.

The woman, after screaming at the closed door, turned and began to stumble towards the car. She had her phone out and was trying to press the buttons. He assumed she was trying to call a taxi, but all he could hear was her muttering. She walked past his car and he watched her bouncing off the pebble-dashed wall of the pub, wondering how much alcohol she’d consumed.

He put the car in gear and followed her for a little while; then, as he pulled up next to her, he wound the window down.

Uh oh. I see trouble ahead!

If you can’t wait to find out more either, Dying Breath is published today so go forth and grab your copy now!

Helen Phifer lives in a small town called Barrow-in-Furness with her husband and five children.

Helen has always loved writing and reading. Her love of horror films and novels is legendary. Helen adores reading books which make the hair on the back of her neck stand on end. Unable to find enough scary stories to read she decided to write her own.

Helen’s debut novel ‘The Ghost House’ was published by Carina UK in October 2013 and went on to become a best seller along with the rest of the Annie Graham series. The Secrets of the Shadows, The Forgotten Cottage, The Lake House, The Girls in the Woods and The Face Behind the Mask.

The Good Sisters is a standalone horror story which will scare the pants off you or so her lovely readers have told her. It scared Helen when she was writing it so she pretty much agrees with them.