Happy Hump Day and welcome to my stop on the blog tour for We Have Lost The Chihuahuas by Paul Mathews. Many thanks to Emma Mitchell! Paul has very kindly taken the time to answer a few questions but first, here’s some information on the book! 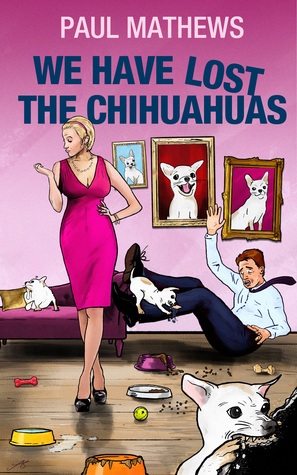 London, 2046. The British Republic has a new First Lady. She’s Californian, ‘in-your-face, for sure’ and she’s got big plans for a Buckingham Palace refurb. When her three Chihuahuas go missing, one man is determined to avoid getting dragged into it all. His name is Pond. Howie Pond – presidential spokesperson, retired secret agent and cat lover.

Meanwhile, Howie’s wife Britt is handed her first assignment as a National Security and Intelligence Service rookie – to solve the mystery of the missing canine trio.

Will Howie manage to slope off to the pub before he can be roped into help? Will Britt unmask the dog-napper and grab the glory?

* How important are the names in your book? Do you choose the names based on liking the way they sound or their meaning? Do you have any name choosing resources you can recommend?

I always try and match a name to a character, where possible. ‘Howie’ just came to me for my main character. He’s a laid-back type of guy and it just seemed to fit.

Other names require a little more thought. For example, for foreign characters I always check the meaning of names for something suitable.

Names can change during the writing process. My main female character, Britt, started off as Malina (I think, I never keep the notes!). One character changed from Magda to Martha and I kept transposing the two – I’ve learnt my lesson about changing a name to a similarly sounding one!

* Are you a plotter or pantster?

I’m most definitely a plotter who writes a brief summary of each chapter. But I often add in new elements, characters or locations along the way.

While early chapters go to plan, it’s actually pretty difficult to be 100 per cent certain what’s going to happen in chapter 40. This means my daily routine has a structure but I can go off on a tangent where the story allows. For example, in ‘We Have Lost The Chihuahuas’ I added in a completely new character, called Arthur, right at the end who adds to the comedy chaos. Like most things in life, a bit of flexibility always helps.

* Do you read your reviews? Do you respond to them if they are particularly good or bad? How do you deal with the bad?

Yes, I read every review on Amazon and Goodreads. It’s how you pick up occasional tips about what worked and what didn’t.

Experience has taught me never to respond to reviews. I did once on Goodreads, after a fellow author wrote something critical which wasn’t at all justified (after reading one chapter). But then her band of merry followers decided to troll me, Goodreads deleted all my perfectly reasonable comments and it’s a real mess now. Never again!

* What is your least favourite part of the writing/publishing process?

Reviewing the same text time and time again – especially towards the end, when it doesn’t change much – can turn the brain to mush after a while! I now try and build gaps of at least a week of two between major edits.

* What are your favourite and least favourite types of scenes to write?

Opening and concluding chapters are always fun. The former because you’re starting a new project and actually doing some writing (rather than plotting, marketing & other indie publisher chores) and the latter because there is literary light at the end of the tunnel!

* If you could have one superpower, what would it be and why?

The ability to become a cat for a day and see the world from a feline perspective.

Thanks so much to Paul Mathews for taking the time out to answer these questions!

We Have Lost The Chihuahuas will be published on November 28th.

Paul Mathews is a quite funny British guy who’s managed to escape his day job and is currently on the run as a comedy novelist. His sharp, satirical – often surreal – sense of humour draws on 20 years as a British Government press officer, during which time he encountered politicians, senior civil servants, HR managers, and lots of other people who really sucked at their jobs.

His popular ‘We Have Lost’ comedy-thriller series set in 2040s London, starring beleaguered presidential spokesman and wannabe secret agent Howie Pond, currently comprises four titles with more on the way. Paul has read all the books at least ten times and highly recommends them.

Make him happy by signing up for his ‘Very Funny Newsletter’ here. If you don’t want to sign up for it, stay calm and do nothing.

Paul also owns a cat, Lulu, who works as his assistant. All fan mail to her, please. 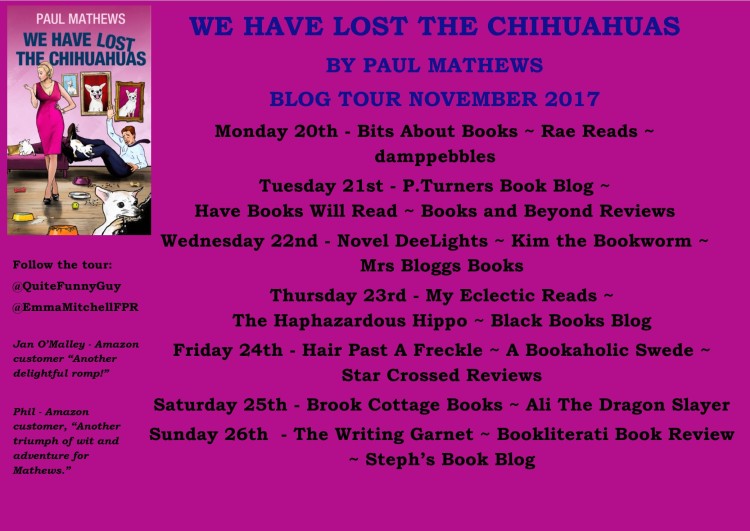