It’s my pleasure to welcome Larry Enmon to the blog today. Larry is the author of the thriller Wormwood, which was published by Bloodhound Books on November 1st. He’ll be talking about things unpublished authors need to know about. But first, here’s a little information about his book. 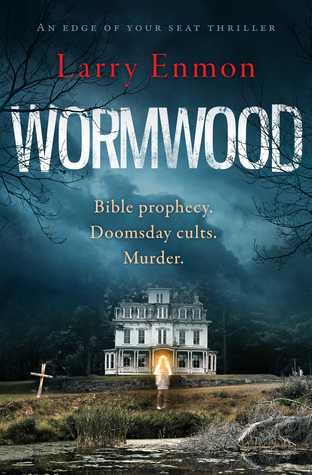 In Dallas, Texas, Katrina Wallace goes missing. As the mayor’s daughter, her kidnapping triggers mounting political pressure and forces the Chief of Police to put two senior detectives on the case. Rob Soliz and Frank Pierce have done the impossible in the past, but their methods are unconventional.

The only evidence at the scene is a Bible found in the girl’s car and soon Frank and Rob find themselves involved in a disturbing investigation shrouded by Bible prophecy, doomsday cults, and murder.

Is Katrina still alive? And what exactly is Wormwood?

As the trail leads them into the woods of rural East Texas, Frank must deal with his lingering religious doubts and solve the case. His worst fears will be realised when he must discover the ugly truth about Wormwood. But he and Rob will have to get out alive to tell the story.

(#1) In a nutshell, it’s a numbers game. Literary agents, editors, and publishers are all looking for someone who can make them money. The more the better. They have nothing against you when they reject your query or manuscript. They have to sign or publish what they believe they can sell­­—nothing personal, just business. Not every creative idea is right for everyone.

The agency representing me receives approximately twenty thousand queries each year. From this, they offer representation to twenty writers. I am honored to be among the twenty selected last year. I would have never found them if I hadn’t been aggressive in sending out my work. If you haven’t submitted to at least a hundred agents, you’re still a rookie in my book, because I submitted to more than that before finding the right one. By being aggressive, I landed an agent who loved my manuscript and got me a two-book deal with two different publishers in two different countries. Hey, that’s like a four book deal!

The more you put your work out there, the better your chances of finding that one agent who “gets” what you’re doing and wants to be a part of it. Keep playing the numbers.

(#2) Don’t be afraid to change. For years I wrote horror and suspense/thrillers, and no literary agent gave me the time of day. To be honest, I wasn’t particularly aggressive about submitting my work. Writing was a hobby for me then, but after I retired, I decided to turn it into a job. And it wasn’t until I changed genres that I found success.

I never watched or read crime mystery—ever! I lived it every day as a police officer and federal agent. Since about ninety percent of the material out there in books and movies isn’t even close to realistic, it just wasn’t my favorite genre.

That all changed when my daughter bought me the True Detective DVD for Christmas a couple of years ago. After watching the first season, I was impressed. While I still wasn’t interested in crime mysteries, I decided to read more of them for research. During this time the idea for a book started coming together. When I believed I was ready, I sat down and wrote Wormwood.

After a decade of writing, my first crime mystery novel was picked up by a literary agent. If I hadn’t changed genres, I’d still be plowing along doing the same old thing that led nowhere. Don’t be afraid of the unknown—make it known.

(#3) Only submit your best work. I’ve known writers who, when submitting to agents or editors, cavalierly say, “Yeah, I threw a few things out there just to get some feedback.” All the people I’ve met in the publishing industry are very sincere and hard working. Most take work home with them and often do ten- to twelve-hour days.

Today writers have a difficult time getting noticed. Fewer readers and more writers have made literary agents the “gate keepers” of the publishing industry. They do the dirty work in the trenches, reviewing thousands of queries, and they only offer representation to the ones they believe have enough potential to go the distance. If you, as the writer, send them anything but your best, you probably should be convicted of a war crime. (Just kidding.)

The thing is, you get the reputation you deserve in this business. Be polite, be understanding, and behave. It’s not all about you. Many people will work hard to make your book a success. After all, if you make money—they make money.

(#4) Learn the craft and your genre. A lot of new writers submit their manuscripts before they’re ready. I know—I was one of them. Writing is a lifetime learning experience. After crafting government reports for thirty-seven years, my writing sounded like a report. Couple that with my taste for the thriller classics best represented by Frederick Forsyth and Ian Fleming, and I ended up producing writing didn’t have the zest needed for the twenty-first century.  By reading newer thrillers and crime mysteries, I gained a better understanding of what the market wants today.

Read articles and books on writing, take a writing class, attend conferences, and join a writer’s group. I’ve done all the above, and I’m still learning. Many of the old crime mystery and thriller writers sound like hacks today because readers have become much more sophisticated. I still enjoy their work, but I can pick apart a paragraph with the no-no’s I’d never do. All writers can—it’s like magic.

To my way of thinking there are three types of writers—good, competent, and bad. I believe I am more than competent and at the threshold of being good at this stage of my career. With any luck and another decade or two, I might even become great. Wait…did I just say three types. I meant four.

Hahaha! Great tips, Larry! Thanks for sharing them with us!

Larry Enmon retired from the U.S. Secret Service and started writing. During his career he acted as liaison between the USSS and FBI, working in the Joint Terrorism Task Force.  He received special training from the FBI and CIA in weapons of mass destruction.

For relaxation, and to get away from the city, he likes spending time at his ranch in rural Eastern Texas. With 200+ acres, private shooting range, a 2 ½ acre pond, and miles of woodland trails to explore on four-wheelers and RTV’s, it’s the perfect getaway.

He swims four miles a week, holds a Divemaster rating with the Professional Association of Diving Instructors and has a black belt in Tang Soo Do karate.  He is married with two children and lives in Tarrant County, TX.

Thank you so much to Larry Enmon for stopping by the blog! Best of luck with Wormwood!