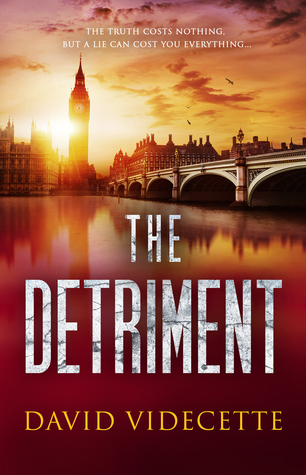 “The truth costs nothing, but a lie can cost you everything…”

June 2007: a barbaric nail bomb is planted outside a London nightclub, a spy is found dead in his garden, and a blazing Jeep is driven into Glasgow airport. Three events bound by an earth-shattering connection that should have remained buried forever.

From the author of ‘The Theseus Paradox’, the smash-hit 7/7 thriller based on true events, comes the sequel about a real-life mystery that threatens to destroy a nation. Detective Inspector Jake Flannagan must uncover how a series of astonishing events are inextricably linked, before the past closes in on him.

We all have secrets we say we’ll never tell.

Flippin’ heck! David Videcette is back with a vengeance! After having read and loved The Theseus Paradox, I knew it wouldn’t be long until I picked up this one. It was one of my most anticipated books and even though my expectations were sky high, I was not disappointed! David still can’t tell you the truth, but he can tell you a story and once again, it’s an absolute corker!

It’s June 2007 and a series of events are keeping law enforcement busy. A car with a nail bomb is found outside a nightclub, a spy is found dead in his garden and a Jeep is driven into Glasgow airport with one of the occupants setting himself on fire. Are these events in any connected and if so, how? Meanwhile, Claire, Jake Flannagan’s on/off girlfriend drags him into an investigation of her own.

After events from the previous book, which you should really read by the way if you don’t want to miss out on anything, Jake was suspended and has been sidelined in the office for the last six months. Eager to sink his teeth back into an investigation, he didn’t quite count on having to work with an old nemesis. Jake is still doing what he thinks is right, no matter the trouble it may land him in. But he’s also struggling and may finally admit to himself that he might possibly need some help.

David Videcette is quite the masterful storyteller. While this story is based on true events, I can never figure out where fact ends and fiction begins. And then I read the author’s notes and almost wish I hadn’t. Sometimes it’s better not to know.

The Detriment is action-packed from the very first page. There’s a lot going on and it’s one heck of a compelling, intense and thrilling ride! It left me utterly breathless, exhausted but oh so, satisfied. This is such an incredible series and it would make the most fantastic movie or TV series. (Richard Armitage would be perfect, by the way. Just saying’.)

With a flawed, yet highly likeable protagonist, various threads and a brilliantly executed and intelligent plot, this chilling thriller is a total must-read! I can’t wait to read the next Jake Flannigan book!

The Detriment is available now!

12 comments for “The Detriment by David Videcette @DavidVidecette”