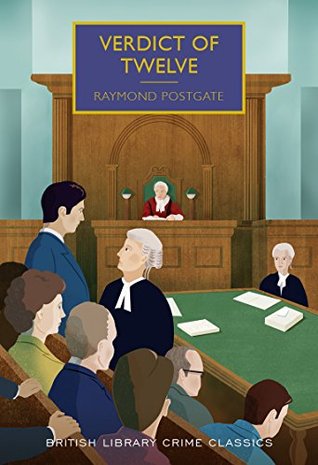 A woman is on trial for her life, accused of murder. Each of the 12 members of the jury has his or her own burden of guilt and prejudice which could effect the outcome. Hailed as one of the best mysteries of the year when it was first published in 1940, this book has become a classic of the genre.

This is the second book in the British Library Crime Classics series I’ve read and I’m now left with no doubt whatsoever that I’m thoroughly going to enjoy this journey through time. I find it truly impressive how these somehow manage to stand the test of time, despite the rather old fashioned and posh language. Personally, I quite enjoyed that which is a bonus.

Verdict of Twelve is told in various parts. Part one focuses on the twelve members of the jury. This results in a most fascinating character study and gives you the opportunity to try and figure out for yourself which way these jurors would vote at a trial. Because surely they are influenced by their own background, experiences, prejudices, religion even maybe and so they already have a preconceived notion of how this trial should end before it’s even started, no matter the evidence that will be presented to them.

Part two tells us about the woman who’s on trial for murder. I won’t delve into that bit as it will give away too much. I will however say that I absolutely loathed this character and based on that alone, I willed her to be guilty of the crime. Which clearly goes to show I should never be on a jury and I too, as a reader, fell prey to prejudice. I’d like to think that was the author’s intention though.

The rest of the story centres around the investigation and the trial. I was incredibly hooked on it all, despite maybe sometimes having a moment or two where a few sentences went a tad over my head. 😄 This just really combined so many of the things I like to read about. There’s a crime, there’s a trial and I adored the setting. It’s like a legal crime fiction thriller of the olden days. There’s an intriguing plot and a varied cast of interesting characters and there’s poison! How can you not love a book that has poison in it?

So not only do I find myself completely in love with those gorgeous covers, I’m also truly enjoying the stories and I very much look forward to adding more of them to my collection.

Verdict of Twelve was published in January.

23 comments for “Verdict of Twelve by Raymond Postgate @BL_Publishing”