It is my absolute pleasure to kick off the blog tour for The Fallen Agent by Oliver Tidy today! Many thanks to Caroline Vincent for the invitation to join and the advanced copy! 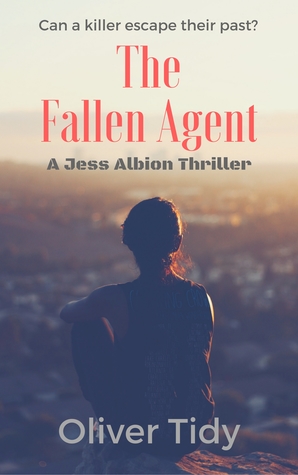 Jess Albion has recently started a new life on the other side of the world with a new identity. She used to be MI5. Then a job went bad, someone died and she was made an example of in the British courts. But MI5 look after their own. Or they did until rumours of a planned Al Qaeda biological terror attack on London started circulating. Now someone in the British security services is giving agents up in return for information. No price, it seems, is too high to save London from the ultimate threat.

When Jess’s fresh start is compromised she has a choice to make: run and hide and spend the rest of her life looking over her shoulder or go looking for the threat and snuff it out. On her own, she’d run, but she has Nick on her side.

The Fallen Agent is the first book in a new series featuring protagonist Jess Albion. Jess used to be MI5 but when she was made an example off in the British courts after a case went wrong and someone died, she was made to disappear to the other side of the world.

If that sounds familiar, it might be because the story was inspired by an episode of the most brilliant British tv series ever made, namely Spooks. Since I am a huge fan and regularly watch all ten seasons again, there was no way I’d pass up the opportunity to read this one.

Jess was on trial for the murder of the son of an Albanian mafia boss. When he realises Jess wasn’t punished at all, he feels the British justice system has failed him and his son and he’s on the hunt for justice. What follows is a fantastic display of the evil games people play, as you would expect from a delightful spy story.

Oliver Tidy delivers a compelling and tense plot, full of intrigue, revenge and betrayal. And not just from the bad guys. MI5 may say they look after their own but that’s not always the case. The tension builds up nicely as the clock ticks away the minutes to stop a terrorist attack that will have devastating consequences for the entire world population.

The thrill of the chase, combined with illicit meetings and lots of action, had me hooked. Just like the show, the author has no problems whatsoever putting important characters in danger, which I can always appreciate. I thought this was a truly excellent way to kick-off a new series and I thoroughly enjoyed it. It’ll be interesting to see how the characters develop in the next instalment. I look forward to it very much.

The Fallen Agent is out today!

Crime writing author Oliver Tidy has had a life-long love affair with books. He dreams of one day writing something that he could find in a beautifully-jacketed hard-cover or paperback copy on a shelf in a book shop. He’d even be happy with something taking up space in the remainder bin, on a pavement, in the rain, outside The Works.

He found the time and opportunity to finally indulge his writing ambition after moving abroad to teach English as a foreign language to young learners eight years ago.

Impatient for success and an income that would enable him to stay at home all day in his pyjamas he discovered self-publishing. He gave it go. By and large readers have been kind to him. Very kind. Kind enough that two years ago he was able to give up the day job and write full-time. Mostly in his pyjamas.

Oliver Tidy has fourteen books in three series, a couple of stand-alone novels and a couple of short story collections. All available through Amazon. Among his books are The Romney and Marsh Files (British police procedurals set in Dover) and the Booker & Cash novels, a series of private detective tales set in the south of England and published by Bloodhound Books.

Oliver is back living on Romney Marsh in the UK. His home. He still wakes in the night from time to time shouting about seeing his books on a shelf in Waterstones.