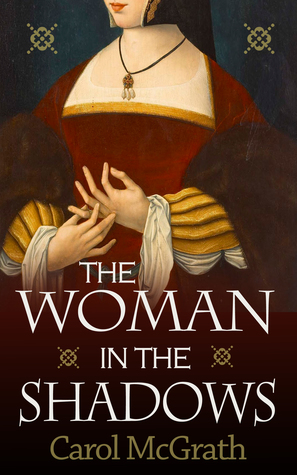 When beautiful cloth merchant’s daughter Elizabeth Williams is widowed at the age of twenty-two, she is determined to make herself a success in the business she has learned from her father. But there are those who oppose a woman making her own way in the world, and soon Elizabeth realises she may have some powerful enemies – enemies who also know the truth about her late husband…

Security – and happiness – comes when Elizabeth is introduced to kindly, ambitious merchant turned lawyer, Thomas Cromwell. Their marriage is one based on mutual love and respect…but it isn’t always easy being the wife of an influential, headstrong man in Henry VIII’s London. The city is filled with ruthless people and strange delights – and Elizabeth realises she must adjust to the life she has chose or risk losing everything.

As a huge fan of the Tudor era, I jumped at the chance to join the blog tour for The Woman in the Shadows. There’s no denying that Thomas Cromwell played a crucial part in history but very little is known about his wife Elizabeth. This story is told through her eyes and so while the story was obviously thoroughly researched and adheres to facts, a lot of it is fiction which I must say I didn’t object to at all as the story flows seamlessly.

Elizabeth is a young widow when she meets Thomas. She’s determined to make a success of herself but the streets of London are full of danger and no safe place for a woman. Through the years, as we follow the rise of Thomas Cromwell, Elizabeth’s life goes through many changes. From being a widow struggling to survive to being a gentlewoman with a big household, she must also accept that maybe there are things she’s better off not knowing as her husband becomes more ambitious and works his way up from being a merchant and a lawyer to being in the employ of Cardinal Wolsey.

Now, let me just say that I was a little disappointed that I didn’t learn anything about life at court. However, that’s my own fault as I didn’t know Elizabeth had passed away before Thomas “made it big”, so to speak. I must clearly brush up on my history. Despite that, I still thoroughly enjoyed learning about daily life in the early Tudor days, especially as a woman. Women who were more often than not left in the dark from whatever shenanigans their husbands got up to.

From the rituals that were followed when a child was born to those that were in place when someone died and even marriage betrothals, these things were truly fascinating to read about. Thankfully some have gone out of fashion! The novel also gives a glimpse into life as cloth merchant which I knew nothing about and all the intricacies of running a household. Overall, I take quite a lot away from this novel and it’s a very fine addition to my Tudor collection.

Many thanks to the publisher for the opportunity to join the blog tour and for my advanced copy!

The Woman in the Shadows is available now!

My first degree is in History and English from Queens University Belfast. I have a postgraduate MA in writing from Queens University and an Mphil in writing from The Royal Holloway ,University of London. My debut novel The Handfasted Wife is the first in a Trilogy The Daughters of Hastings. The first is the story of 1066 and its aftermath from the perspective of the noble women. The Swan-Daughter and The Betrothed Sister have followed. All have been best sellers. My new novel The Woman in the Shadows tells the tale of Thomas and Elizabeth Cromwell and is the story of an early Tudor marriage. I am now working on a medieval trilogy about ‘she wolf’ queens. [Goodreads]