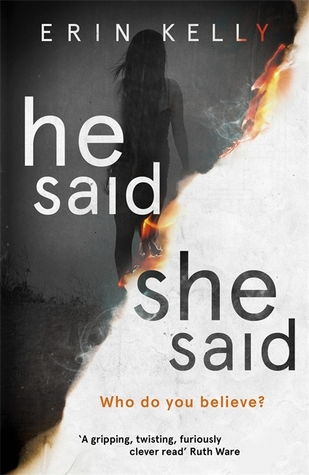 In the hushed aftermath of a total eclipse, Laura witnesses a brutal attack.

She and her boyfriend Kit call the police, and in that moment, it is not only the victim’s life that is changed forever.

Fifteen years on, Laura and Kit live in fear.

And while Laura knows she was right to speak out, the events that follow have taught her that you can never see the whole picture : something – and someone – is always in the dark.

You can never see the whole picture and someone is always in the dark.

He Said / She Said is my first introduction to author Erin Kelly and I’ve been left with the feeling of missing out so I will definitely be checking out some of her other work at some point. This book got a lot of hype when it was first published and I can’t believe it’s taken me this along to get around to reading it.

In 1999, in the aftermath of an eclipse, Laura witnesses a brutal attack and lives are changed forever. Fifteen years later, Laura and her husband still live in fear and that’s all I’m going to say about that. This is one of those books where the less you know the better, so do yourself a favour and go in blind!

He Said / She Said is a twisty tale of deceit, lies and deception. Nothing is what it looks like and nobody is who you think they are. This is a brilliantly constructed and well executed plot. I found the beginning of the book a little bit slow going and even slightly confusing but soon found myself completely engrossed as Erin Kelly deftly builds up the tension and suspense.

There are so many twists and turns in this story that I didn’t see coming at all. It felt like being hit over the head with a frying pan, over and over again. The hits just kept on coming and by the end I felt absolutely drained and sucker-punched. These characters are so complex and unreliable. My loyalty kept switching back and forth, only to end up being utterly non-existent as everything is revealed in the end.

He Said / She Said manages to stand out in this quite overcrowded genre and Erin Kelly is one talented author. I’m glad she’s on my radar now as it wasn’t just the characters who were left in the dark, quite literally sometimes, but also I, the reader. Any author who can take me by surprise like this, is worth following.

He Said / She Said was published in April.