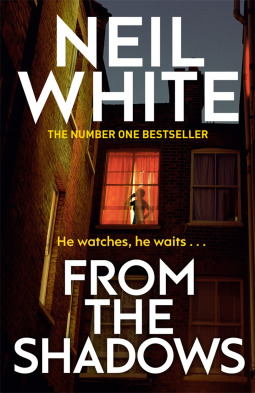 He hides in the shadows, watching, waiting, until the time is right . . .

Mary Kendricks, a smart, pretty, twenty-four-year-old teacher, has been brutally murdered and Robert Carter is accused of killing her.

When defence lawyer, Dan Grant inherits Carter’s case only weeks before the trial starts, everyone expects him just to babysit it, but Dan’s not that kind of lawyer. He’ll follow the evidence – wherever it takes him.

But as Dan and his investigator Jayne Brett look into the case, they discover that there is more to it than meets the eye. In order to do their jobs they need to push the limits of the system, even if it means putting themselves in danger.

Together they will get to the truth – whatever the cost.

Phwoar! I don’t know where to start but if I could shout from the rooftops how brilliant this book is, I would totally do it! This is an absolute corker!

Mary Kendricks has been murdered and Robert Carter is accused of killing her. Two weeks before the trial starts, defence lawyer Dan Grant inherits the case. He’s merely supposed to babysit it but he’s not that kind of lawyer. Dan and his investigator, Jane, soon discover things aren’t quite what they seem but will their search for the truth put them in danger?

From the Shadows is the first book in a new thriller series featuring defence lawyer Dan Grant. Dan isn’t like most other lawyers. He loves his job but he’s not doing it for the money. This is one lawyer who actually has a moral compass, no matter where it leads him. So when the case of Robert Carter just lands in his lap, he can’t help but dig deeper to find out why.

Boy, oh boy! Let me just say, I love courtroom drama so the mere thought of having something like that in my hands already made me drool like Homer Simpson in a donut shop. Throw in a murder, investigators, twists and turns and a bit of “will they, won’t they?” and I have to say, this is the best afternoon I’ve had in weeks!

What an amazingly constructed plot this is! Tense and gripping, it had me hooked from the start. With a host of unreliable witness statements, I couldn’t flip the pages fast enough to figure out what was going on. Incredibly engrossing and addictive, it reminded me of the good old John Grisham days. Aw, nostalgia.

This was my first time reading anything by Neil White but it definitely won’t be my last and I can’t wait to read book 2 in the Dan Grant series! I loved this and highly recommend it!

From the Shadows is out now!

16 comments for “From the Shadows by Neil White @BonnierZaffre”