Happy Wednesday! Today it’s my turn to host the blog tour for Watch You Burn by K.A. Richardson which I’ll be reviewing as soon as I’ve told you a little bit about the book! 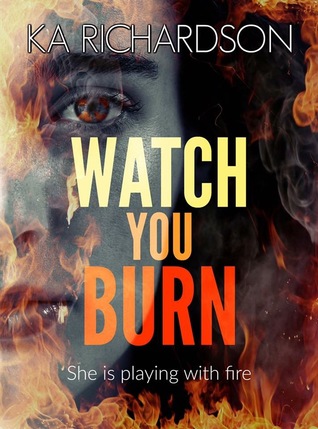 Someone is breaking into Fire Investigator, Edina Blaze’s, home and leaving deadly messages.

When Glen Peacock is burned alive, she has to put her own problems aside and attend the location with Crime Scene Manager, Kevin Lang. As the body count rises, Edina’s sister Heather becomes involved. Is it her setting these gruesome fires? Or is she a target too?

Kevin has seen it all in his years on the force, but when a young girl is found burnt to death, even he is shocked. Who is taking pleasure in watching people burn? Why are they doing it? And will they be caught? DI Alistair McKay and the team from North East Police have to work quickly to stop the killer, before they all end up in flames.

Watch You Burn is the fourth instalment in the North East Police series but don’t you worry for one second because this one can easily be read as a stand-alone!

Edina Blaze is a Fire Investigator and really, with a name like that, how could she not do something related to fires? She’s not having the most fantastic week ever. Someone keeps sneaking into her house, leaving notes and she can’t figure out how this person is getting in. Then there’s her ex-boyfriend Cam, who’s not the nicest guy in the world. Is it him who’s making her feel unsafe in her own home?

As if that wasn’t enough, she also has a job to do. Someone is rather enjoying burning college kids alive and the case hits particularly close to home as Edina’s sister Heather finds herself involved.

The first chapter sets the tone of the book perfectly. I found it especially gripping to follow the thoughts of the pyromaniac killer. Their fascination with all things fire was truly engrossing to read about and provided an incredible insight into the mind of true evil. Or craziness. Or maybe both. I’m a little undecided on that part.

There’s a lot going on in this story, which I really enjoyed and it held my attention from start to finish. It’s quite action-packed from the case Edina and Kevin are working on, to events in Edina’s private life. Great plot, realistic and believable characters with some gruesome and uncomfortable scenes that will be tough to forget. If you don’t mind reading about crispy bodies, then this book is for you!

Watch You Burn was published on April 25th.

My name is Kerry-Ann Richardson (generally known as Kerry) and I write as KA Richardson. I started writing the North East Police series in 2010 when I was working towards my MA Creative Writing – I used the first 15000 words of With Deadly Intent as my dissertation. I passed my MA in 2011 and kept on writing. This all came about from working as a Crime Scene Investigator – I’d always written but when I was a CSI, I went to see a psychic, Anthony, and he wanted to know why I wasn’t writing. He reminded me that it was my passion and said he could see me signing in Waterstones in 5 years. That was 5.5 years before my first ever signing in Waterstones so he wasn’t far wrong!

I did the normal things writers do when their book is ready to go out into the world – submitted to agents etc. I got a few nice personal responses back – still saying no but being constructive and polite about it. I approached Darren Laws from Caffeine Nights whilst at a crime festival and he asked to see my work. He agreed to publish With Deadly Intent from there, and once that was out, I approached Bloodhound Books as I wanted to know if there was any other interest in my novels. Bloodhound came back within 24 hours and offered me a 3 book deal! And I’ve since signed an additional 3 book deal with them which covers the series up to and including book 7!

If you’d like to get in touch with Kerry, you can via these links :