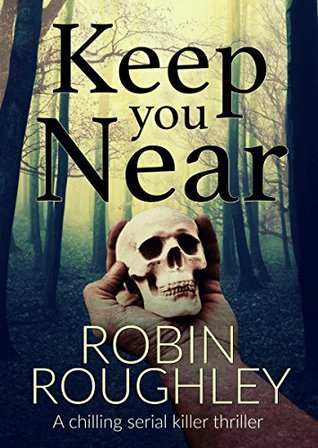 How far would you go to find your missing sister? A normal day in the park turns into a nerve shredding nightmare for eleven year old Marnie Hammond when she finds herself in a desperate chase to stop the “bad man” from abducting Abby. Fifteen years later, Manie is a Detective Sergeant but the memory of her missing sister still haunts her dreams. When it becomes clear that someone is stalking the streets of Kirkhead, DS Hammond has her hands full, and after remains are discovered buried in dense woodland, Marnie fears the worst. But this is only the start of a nightmare that will unearth more bones, more victims and the terror that Abby might be among the dead.

I’m not at all familiar with Robin Roughley, who’s the bestselling author of the DS Lasser series. But since Keep You Near is the first book in a brand-new series featuring Marnie Hammond, I thought it was a good place to start my introduction to this author.

When Marnie was eleven years old, she was unable to stop a bad man from kidnapping her sister. Now fifteen years later, Marnie is a Detective Sergeant and her current case hits a bit too close to home as skeletal remains are discovered in woodland.

Such a thrilling backstory to kick off a new series with. That right there already kept me hooked. Throw in a disturbed serial killer and you have the makings of a compelling story.

There are quite a few threads in this book, some of which I couldn’t quite figure out the importance of, but it all became clear in the end. If you’ve ever wondered why a serial killer stops killing, then this is the book for you. I really enjoyed that aspect of the book as we get to explore the fragmented mind of this troubling soul.

This book is gruesome, with some incredibly descriptive may-just-lose-my-breakfast scenes but it’s also really brilliant and sets quite the tone for the next one in the series.

Keep You Near was published in March.

9 thoughts on “Keep You Near by Robin Roughley @Bloodhoundbook”