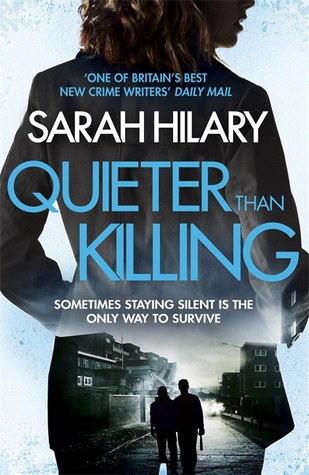 It’s winter, the nights are dark and freezing, and a series of seemingly random assaults is pulling DI Marnie Rome and DS Noah Jake out onto the streets of London. When Marnie’s family home is ransacked, there are signs that the burglary can only have been committed by someone who knows her. Then a child goes missing, yet no-one has reported it. Suddenly, events seem connected, and it’s personal. Someone out there is playing games. It’s time for both Marnie and Noah to face the truth about the creeping, chilling reaches of a troubled upbringing. Keeping quiet can be a means to survival, but the effects can be as terrible as killing.

Bloody hell! Just when I thought this series couldn’t get any better, Sarah Hilary comes out with this fourth one and sucker punches me. Talk about raising your game!

From the very first chapter, I couldn’t help but be totally engrossed. Stephen, Marnie’s foster brother returns, and it’s obvious he’s not done playing games. Meanwhile, Noah is faced with some difficult decisions concerning his brother.

The case is a complicated one. Enthralling, yet also quite sad, touching as it does on a host of topics on the darker side of life including child abuse and gangs.

But it’s not just the case that draws you in, it’s the characters. Marnie’s backstory is incredibly compelling but there’s also Noah and his brother Sol. There’s the relationship between Noah and his partner Dan, which I adore. There’s Welland and Colin. They may be supporting cast but they’re equally brilliant in characterisation. You can’t help but be drawn to them with all their very realistic layers and it’s such a treat to watch their characters develop.

I was so sucked into the story, I didn’t even realise I’d reached the end of the book. Many have said this is the best one in the series yet, which is quite a claim since the previous three were brilliant. But I’m going to agree and say yes, it is. Wholeheartedly. The writing keeps getting better, the characters keep getting deeper. And I can’t wait for book 5 which is set up perfectly at the end of this one. Highly recommend!